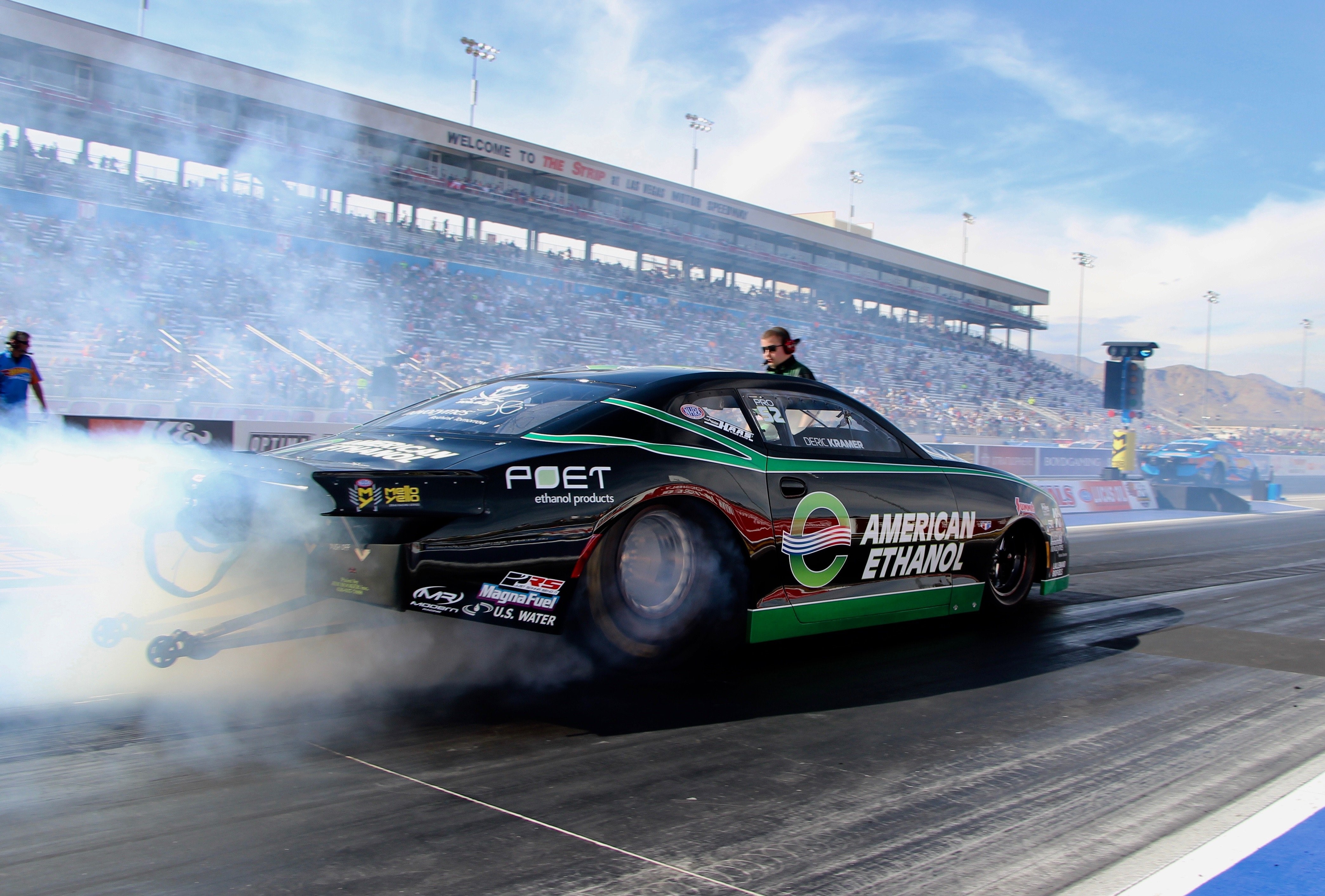 Deric Kramer powered his American Ethanol Chevrolet Camaro to a runner-up finish in Pro Stock last weekend in the 19th annual DENSO Spark Plugs NHRA Four-Wide Nationals in Las Vegas. The competition pits drivers against each other in “quads” of four drivers at a time, and consists of multiple quad rounds. Deric came into race day as the No. 2 qualifier, and advanced through the first round.

“This is my third time racing the Four-Wide and I don’t really get nervous but I have to say that this is the first time I’ve gone up there first round and was really comfortable with the tree,” Deric said. “I’ve seen it enough now that I feel comfortable with it.”

In his second-round quad, Deric was able to choose his lane first based on his impressive first round performance, and crossed the finish line before his three opponents.

“We had some big hitters in the second quad and I don’t think anyone in this class is a slouch right now,” he added. “This class really is about what you do with your left foot and if you can do it better than the person next to you.”

In the final quad round, only .0007-seconds kept Deric from his first-career win.

“It was a good weekend for our American Ethanol team but runner-up is still first loser,” he laughed.

This weekend marks Deric’s first final round appearance and he admits he’s leaving Las Vegas hungry for the next step in his career – a Pro Stock event win.

“I’m really excited about my first final round appearance but I can’t wait until Houston,” he said. “I think we can carry this momentum straight into that race and hopefully come away with the win.” 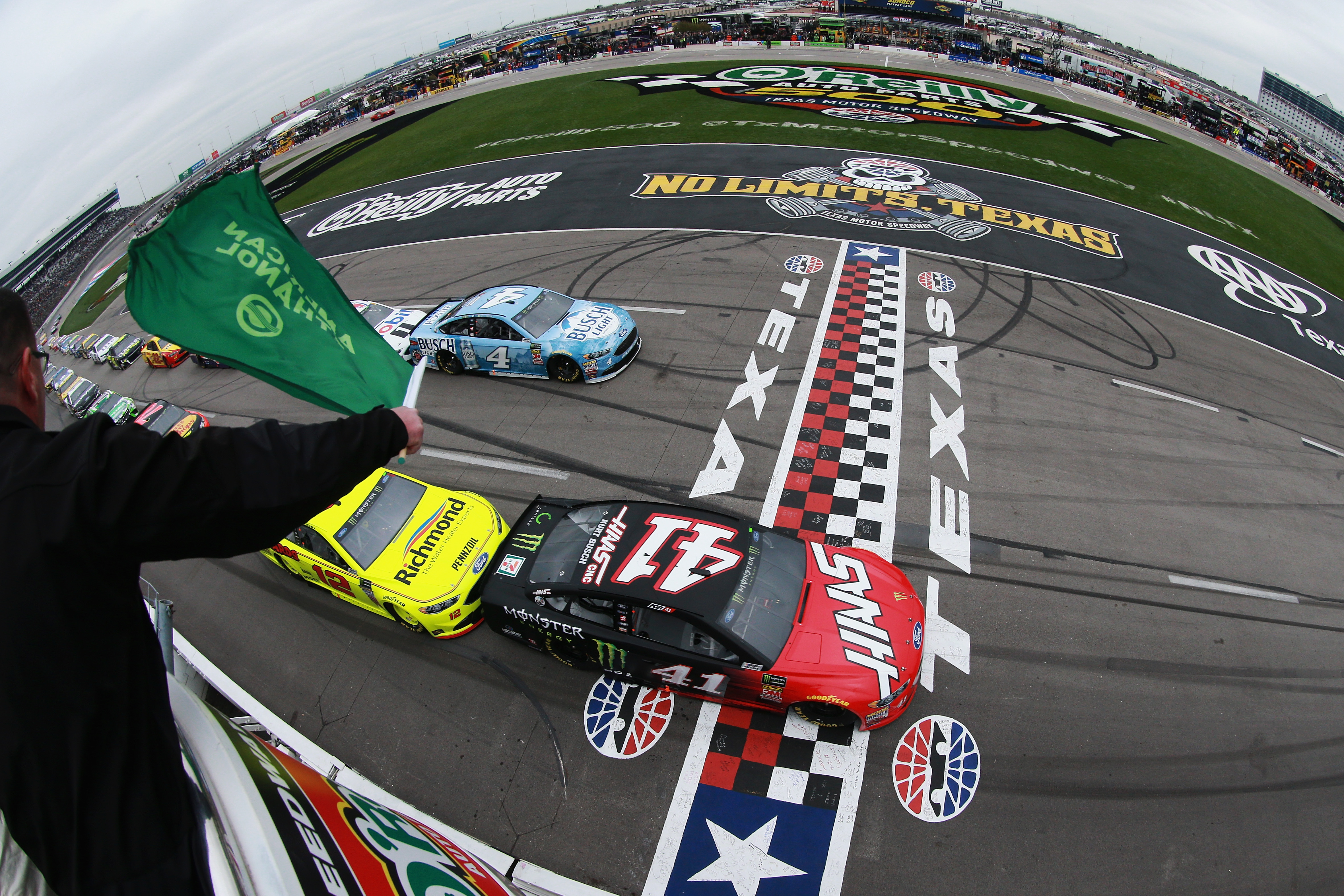 Austin Dillon and No. 3 Team Get Bumped and Bruised at Texas Motor Speedway

Austin Dillon and the No. 3 team experienced some bruising racing conditions during the O’Reilly Auto Parts 500 at Texas Motor Speedway last weekend. Austin was involved in a wreck to start the race but was able to continue on for a long stretch before having to go to the garage for further repairs. Austin talked about the ups and downs of the race, and expressed pride at how his team responded to adversity:

“What a day! We ended up with damage after we were involved in a wreck at the very beginning of the race, but that didn’t slow down the No. 3 team. We worked hard to stay competitive, and I really thought we would end up okay. With about 100 laps to go the cockpit filled with smoke. We ended up in the garage to change a hub. Still, there is so much heart in this team. We made it back out to finish the race. I want to thank our new partner, AstraZeneca, and their SYMBICORT® (budesonide/formoterol fumarate dihydrate) brand, for hanging with us today. It’ a long season and we’ll be back at it next week.”

Austin Dillon and the No. 3 team have shaken off the bumps from last week and are ready for the Food City 500 at Bristol Motor Speedway this weekend! Seven races into the season, Austin took time to reflect on how the team is performing:

“I think we’re better than last year. We started out way more consistent. We’re looking for a little more speed in our Camaro ZL1 at these tracks. But, drivability wise and execution wise, I’m happy with where we are at. So, we need to keep progressing from there and see if we can’t keep building on this momentum we’ve had. Martinsville was a struggle because we lost a race over radio issues, and then in Texas we were involved in a wreck not of our own doing at the beginning of the race that really created issues for that race, but past that it’s been good execution all around for the No. 3 team.”

The Food City 500 will be televised live Sunday, April 8, at 2 p.m. Eastern time on FOX Sports 1. It will also be broadcast live on the Performance Racing Network and SiriusXM NASCAR Radio. 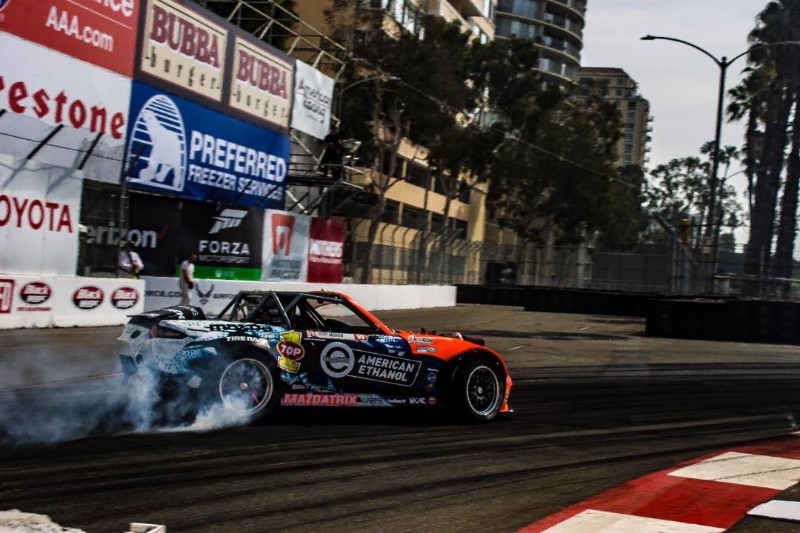 Kyle Mohan debuted his new-look Mazda MX 5 Formula Drift competition car last weekend at Formula Drift Long Beach in front of a sold-out crowd! The Long Beach event is the first Formula Drift round of the season. After overcoming a broken axle in the final seconds of qualifying, Kyle and his team were able to advance to the Top 32 tandem competition.

The MX-5 ran without incident on Saturday and Kyle was able to lay down good runs in practice before going head-to-head against long-time friend and racing competitor Dai Yoshihara. Mohan was unable to defeat Yoshihara in the Top 32 battle, and finished overall in 24th place for the weekend.

Kyle talked about the first competition of the year:

“We learned more about the vehicle’s upgraded components and saw a great improvement in performance over prior years. We are excited to be compete this coming weekend during the Long Beach Grand Prix’s Super Drift event on April 13-14. It’s always one of my favorite tracks as I love to compete on my home turf in front of family, friends, and fans.