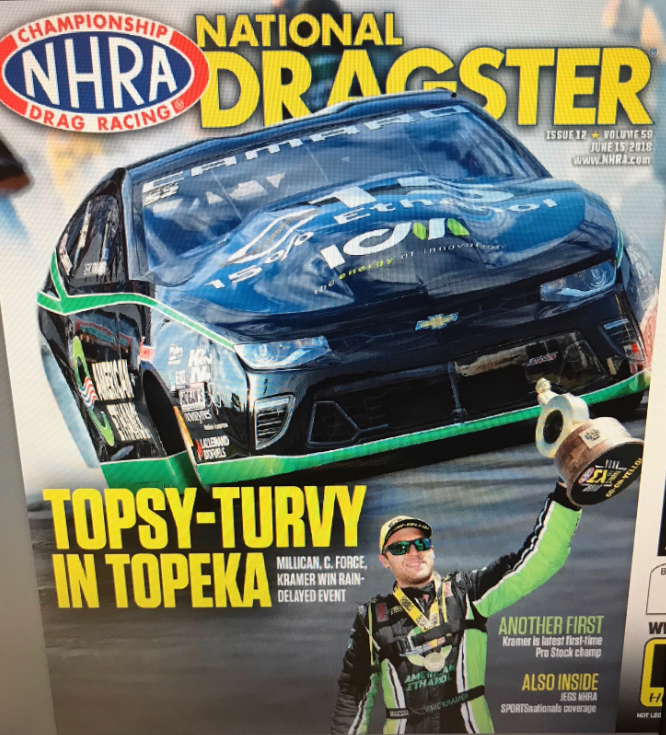 In case you missed it from earlier this year, American Ethanol driver Deric Kramer has been having a storybook season which was punctuated by his first-career NHRA Pro Stock Victory at the 30th Annual Heartland Nationals presented by Minties. Highlights of Deric’s season before the win included qualifying in the pole position for the first time, and earning his first-career runner-up finish in a Pro Stock race. Now, Deric has added a new accomplishment to his amazing season – representing American Ethanol on the cover of National Dragster Magazine! Make sure you follow Deric on Facebook, Twitter, and Instagram to keep up with his progress this season. Deric and the American Ethanol Pro Stock team will be back at it in Bristol this weekend! 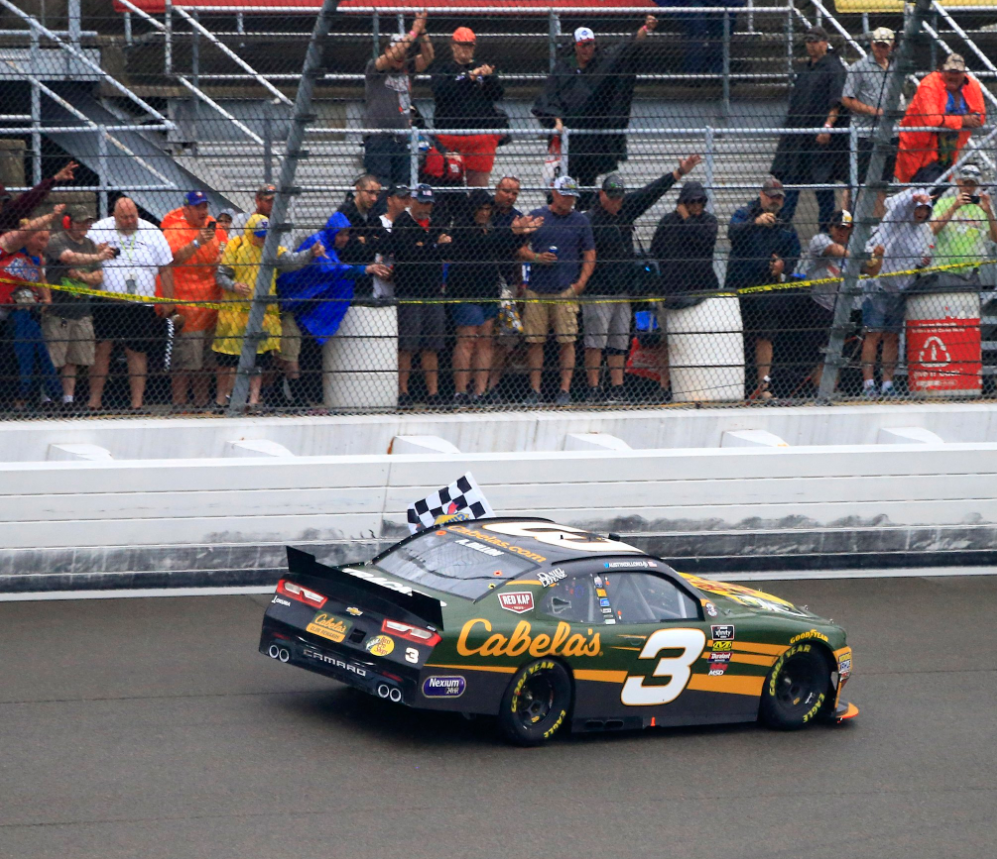 Austin took home first place in the LTi Printing 250 while battling rainy conditions in an abbreviated race. He and his team’s pit strategies have been aggressive all year, and it really paid off for them last weekend. Rather than going in to pit, Austin and his team decided to stay out on the track, thinking that rain might come and cut the race short. The team’s foray into weather forecasting ultimately paid off with a trip back to Victory Lane. 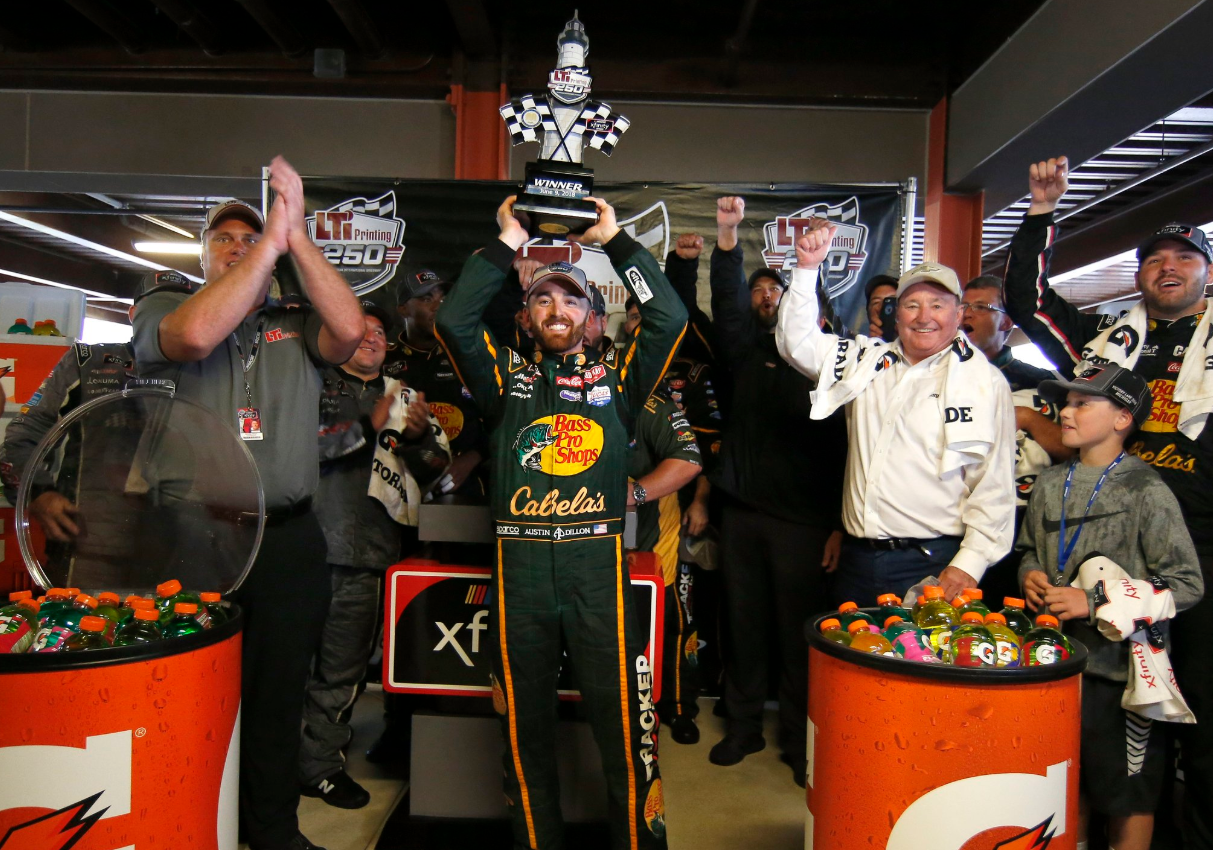 “It’s always amazing to get back to Victory Lane,” Austin said. “We’ve been working really hard at Richard Childress Racing to get back into the Winner’s Circle and as an organization, we really thought that if we could put Nick Harrison and myself together we could get there. It worked because this is only our second race together this year and here we are. The new package we ran this weekend worked. The fans had to love how tight we were all running together. It was definitely difficult to pass that lead guy. I thought it was fun. It reminded me of Go Kart racing back in the day. We knew we were taking a chance by not pitting and gambled that the rain would come. Luckily, it worked out for us this time. We put a lot of effort into this race and spent time in the simulator to make sure we had a car that could pass, which was key. I want to thank Johnny Morris and everyone at Bass Pro Shops and Cabela’s for their support. They have been there with me since early in my career and I hope that I make them proud.”

Meanwhile, Austin continued his upward trend in the Cup Series, finishing the FireKeepers Casino 400 in 14th place. The car picked up speed as the race wore on through the rain, but it ended early due to weather before the No. 3 team could pick up enough track position for a top 10 finish.

“What a wild race! It was crazy racing in the rain like that,” Austin said. “I couldn’t even see out of my windshield because of the rain drops. Overall, we had a solid run in our Dow Salutes Veterans Camaro ZL1. By the end of Stage 2, we had one of the fastest cars on the track. We just lacked the track position. When the rain really started coming down hard, that ended the race. Our Dow Racing team is still trending in the right direction. We just need a little bit more to compete with the next group of cars. I want to thank Dow for honoring US Armed Forces service members on our car this weekend. Without our military, we wouldn’t be able to race and do what we love on the weekends. I’m thankful for their service.”

The NASCAR Monster Energy Cup Series takes a scheduled break this weekend, so Austin Dillon will not be out on the track as he will not run in the Xfinity Series either. However, you can still watch some great racing, as the Iowa 250 presented by Enogen will be run for the Xfinity Series race of the weekend. The race will be televised live on Sunday, June 17, at 5:00 p.m. Eastern time on FS1. It will also be broadcast live on the Motor Racing Network and SiriusXM NASCAR Satellite Radio Channel 90. 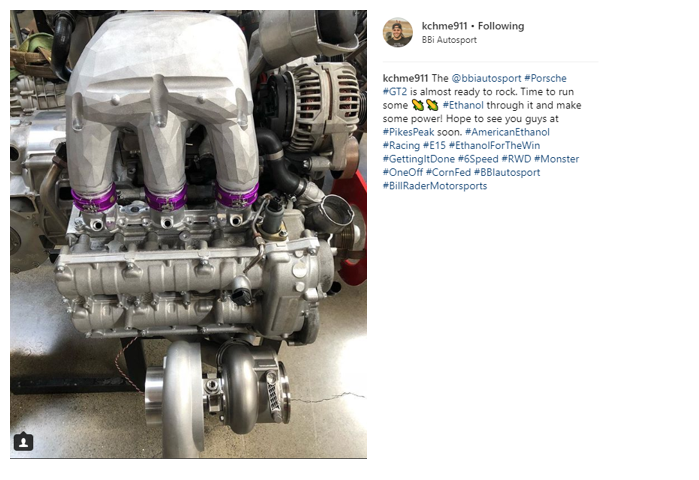 If you haven’t seen much of Anthony Taylor yet this season, it’s because he and his team at BBI Autosport have been hard at work on his brand-new Porsche build. Anthony had his first racing success with Porsches, setting the half-mile Porsche world record with a speed of 219 mph! And now he’s set to debut his new American Ethanol Porsche at the Pikes Peak Airstrip Attack, one of the premier half mile side-by-side trap speed racing events in the world. Stay tuned to the American Ethanol social media channels this weekend for content on the debut! Anthony will also be setting up shop to talk about his new build and how ethanol plays a role in helping him achieve maximum performance on and off the track.