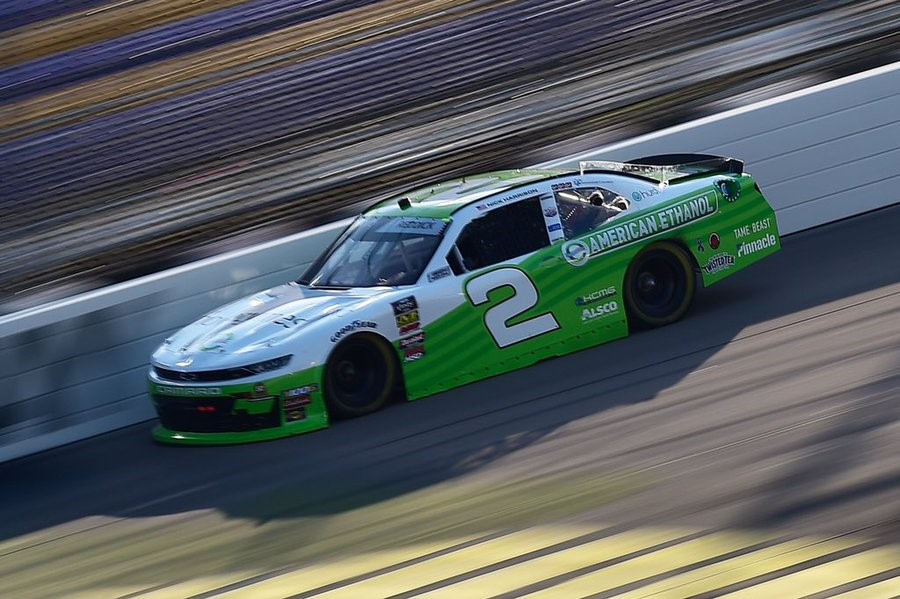 Tyler Reddick put on quite a show in last weekend’s U.S. Cellular 250 at Iowa Speedway in front of representatives of Novozymes, Growth Energy, and biofuels industry guests, earning a top 5 finish in the American Ethanol / Novozymes No. 2 Chevrolet. Reddick ran as high as second place throughout the NASCAR Xfinity Series race, and his finish allowed him to maintain his spot atop the Xfinity Series standings.

“Well, we got a little bit of redemption at Iowa Speedway this time around after the tire issue we had during our first visit this season,” Reddick said. “We had a really good No. 2 American Ethanol / Novozymes Chevrolet Camaro all weekend long. It was snug enough for me to run the bottom well right from the start, so we really just focused on building some rear grip so I could run the top like I wanted. We got it handling right where I needed it to be during the final stage, and I was able to start chasing down the 20 for the lead…The strategy didn’t fall our way today, but we showed we had the speed we needed to contend, and we’ll keep building on that. It shows how strong our team is that we are coming away from this weekend disappointed with a top-five finish. Thanks to American Ethanol and Novozymes for coming on board this weekend. I hope we put on a good show for them today.”

The AELMT Returns from Summer Vacation for Huge Event 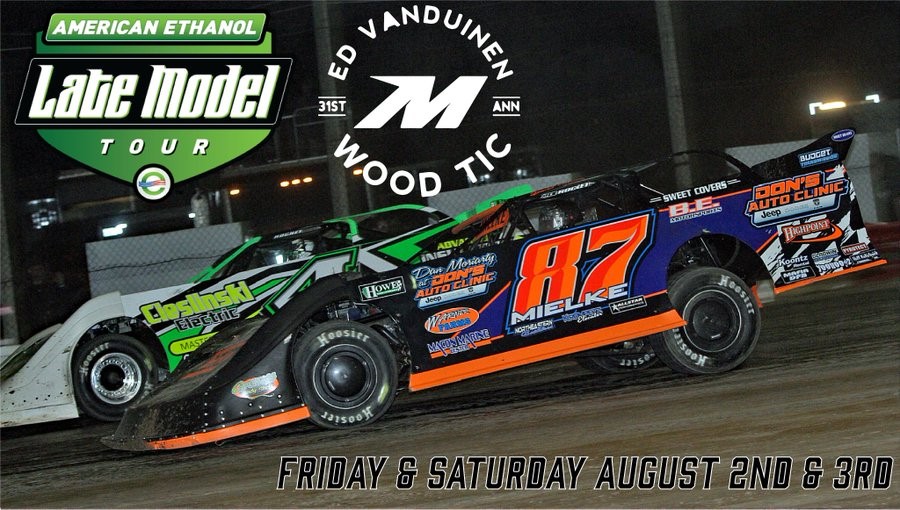 After a brief summer vacation, the American Ethanol Late Model Tour (AELMT) is back to racing action this weekend for the 31st running of the WoodTic Presented by American Ethanol from Merritt Speedway and the Second Annual Dan Salay Memorial Race on Saturday, August 3. The two events have joined together to create the largest DIRTcar UMP Late Model Race in Michigan this season, with a $10,000 purse on the line for the winner of the prestigious event.

The action will begin Friday with Hot Laps, Qualifying, and Heat Races, while the 26-lap Odd/Even Features and the 74-lap, $10,000, main event will take place on Saturday. Racing is slated to begin at 7:00 p.m. on both nights, and full details of the event can be found here. Fans can listen to free in-depth live audio coverage of the AELMT event including post-race and exclusive interviews, insight and analysis, and flag-to-flag coverage, by tuning in to the Motor City Racing Network Broadcast at race-monitor.com. AELMT fans can also monitor Live Timing & Scoring, powered by Motor City Racing Promotions, on the Race Monitor Mobile App. 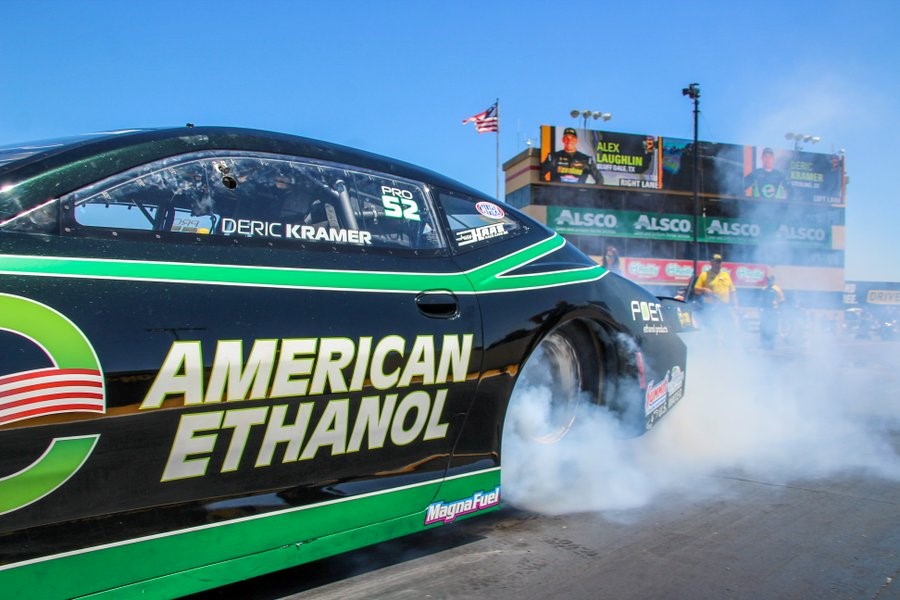 Deric Kramer was looking forward to last weekend’s NHRA Sonoma Nationals in Sonoma, California after a thrilling semifinal appearance in his previous event. Kramer did well in NHRA Pro Stock qualifying and advanced to the second elimination round where he squared off against Jason Line of KB Racing, who in fact builds engines for Kramer’s American Ethanol team. Kramer’s battle with Line came down to the wire, with Line edging out Kramer by a mere 0.004 seconds.

“Close racing is why we came to race Pro Stock in the first place,” Kramer said. “Second round, the difference at the finish line ET-wise was .004 between Jason and I, who just happens to build our engines too. Jason got that win but it’s nice to know those KB Racing guys give us the quality horsepower they save for themselves too.” 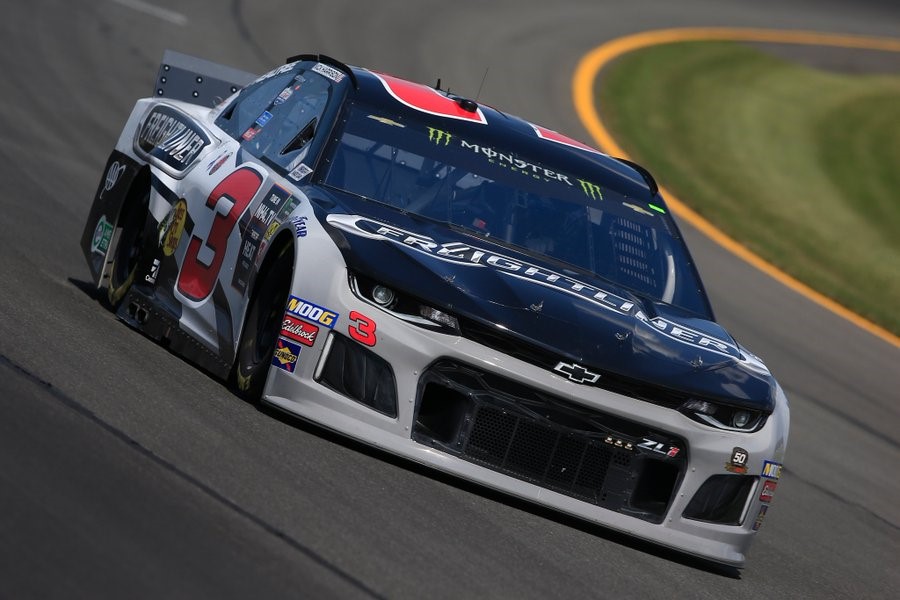 Last weekend, Austin Dillon and the No. 3 team faced adversity at Pocono Raceway, having to start the Gander RV 400 at the back of the field. Dillon and team made headway after the slow start and had some positive takeaways at the end of the race.

“I’m so proud of this team,” Dillon noted. “We had a major setback today after having to start at the rear of the field.  However, these guys didn’t let that dampen our spirits or prevent us from working on a plan to get the No. 3 Freightliner Chevrolet Camaro ZL1 up front. For a little while, it looked like fuel mileage was going to work in our favor, until the caution came out and leveled the playing field. There were a couple of restarts at the end of the race that simply shuffled us out of the top 10. The outside line was definitely preferred, but we just couldn’t catch a break to be positioned up there for those last restarts. This is still a huge improvement over some of the misfortune we’ve had the last several weeks. We have a few opportunities to earn a win and punch our ticket to the Monster Energy NASCAR Cup Series Playoffs, and we’re going to do all we can to get us to that point.”

Austin Dillon heads to Watkins Glen International this weekend for the Go Bowling at The Glen road course race. Dillon spoke candidly about his mindset going into the race, as road courses have been a challenge for the No. 3 team over the years.

“We just try to put in some work beforehand [to prepare],” Dillon explained. “I’ve had decent runs at Watkins Glen International, but we have never been able to string together a good finish. I’m working hard with my crew chief, Danny Stockman. He really loves road course racing. I’m just trying to get better. It’s one of those tracks that we know going into it that there’s a high likelihood that it won’t be the best part of our season, but the opportunity is there to stay out of trouble and have a good run. It’s not for lack of effort. We’re working really hard on our road course program.”

Tune in and Go Bowling at the Glen

The Go Bowling at The Glen at Watkins Glen International will be televised live on Sunday, August 4 at 3 p.m. Eastern time on NBC Sports Network. It will also be broadcast live on the Motor Racing Network and SiriusXM NASCAR Radio.