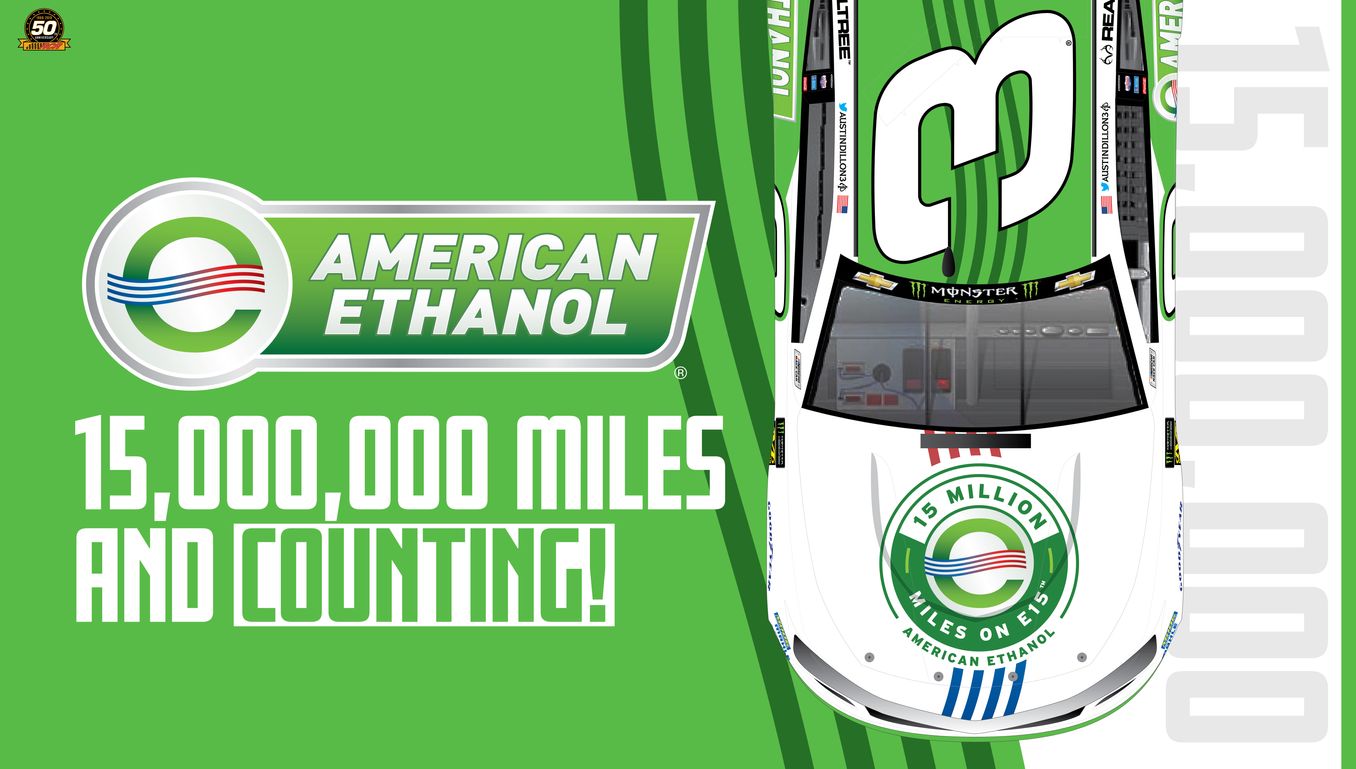 This weekend’s Bluegreen Vacations 500 at ISM Raceway in Phoenix, Ariz. is a special occasion for American Ethanol and the biofuels industry, as NASCAR will surpass 15 million flawless miles driven on E15. NASCAR adopted Sunoco Green E15 made with 15 percent American Ethanol across its three national series in 2011. This forward-looking decision was made in an effort to reduce emissions and make NASCAR a greener sport while still maintaining the levels of performance necessary for engines to survive grueling races, and 15 million miles on E15 in the sport is a testament to the benefits of the fuel on the track and in our engines.

Growth Energy CEO Emily Skor joined members of NASCAR’s senior leadership team to highlight the impressive milestone in an official press release. To further mark the occasion, Austin Dillon’s No. 3 American Ethanol Chevy Camaro ZL1 will have a special 15-million-mile logo on the hood during Sunday’s race, and the American Ethanol Green Flag will receive a similar treatment to start each race this weekend.

To promote 15 million miles on E15 online, we released a video on the American Ethanol social media channels in anticipation for the race weekend, and are working with NASCAR on another video they plan to release on Sunday. American Ethanol will also “take over” the NASCAR.com homepage on Sunday to raise awareness among fans that E15 has continued to power NASCAR drivers for more than 15 million miles. Be sure to keep an eye on the American Ethanol social media channels this weekend for more content and coverage of the race. 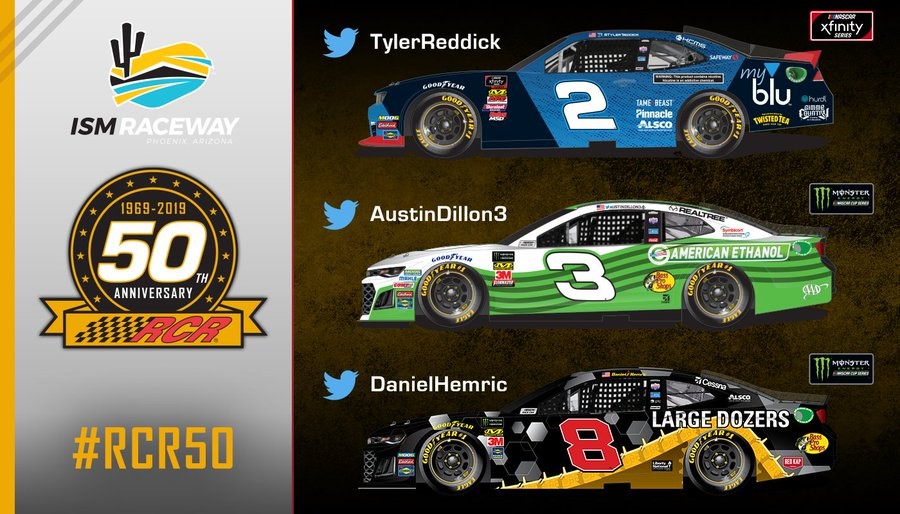 As for the action on the track, Austin Dillon has earned two top-10 finishes at ISM Raceway in his Monster Energy Cup Series career and will look to end the 2019 racing season for American Ethanol on a high note with a similar performance in the special-edition 15-million-mile No. 3 car. When asked whether he could take any experiences from the fall race at ISM Raceway earlier this year and apply it to this weekend’s contest, Dillon shared some insights on how track conditions will come into play:

“Yes, the temperatures aren’t that much different [between the two races]. They can be, but the temperature is not that much different in the track and that is what matters. You are putting the same rubber, as long as the tire doesn’t change it’s the same. I really like racing at ISM Raceway. A lot of the recent changes they’ve made to the track have made everything more interesting. As a driver, you just have more options now in terms of being able to move around a little bit more and make moves with the throttle pedal to be more aggressive.”

Tune in to Celebrate 15 Million Miles on E15

The Bluegreen Vacations 500 will be televised live on Sunday, November 10 at 2:30 p.m. Eastern time on NBC. It will also be broadcast live on the Motor Racing Network and SiriusXM NASCAR Radio. 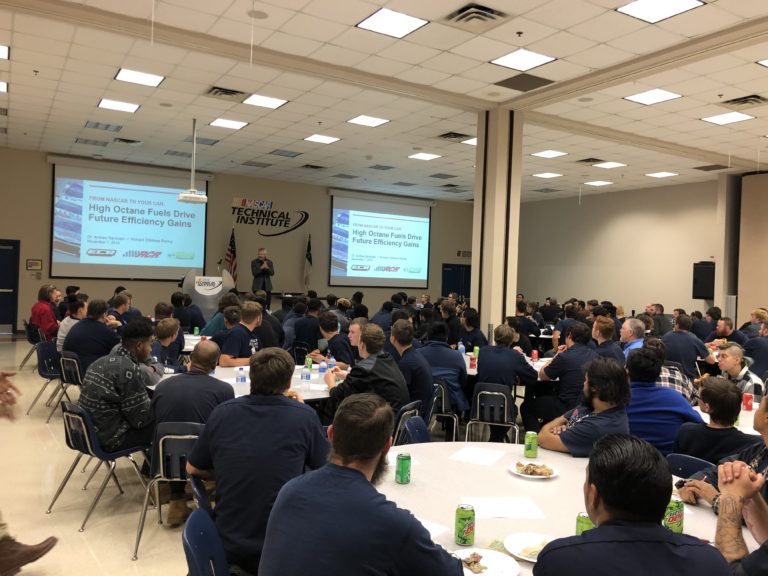 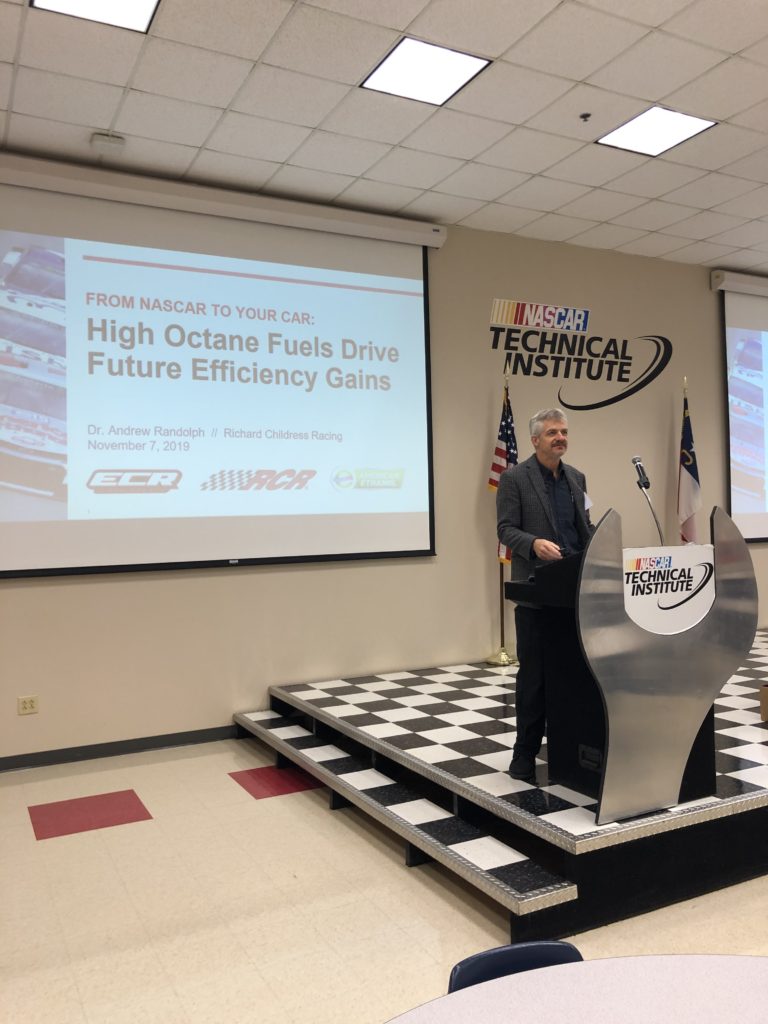 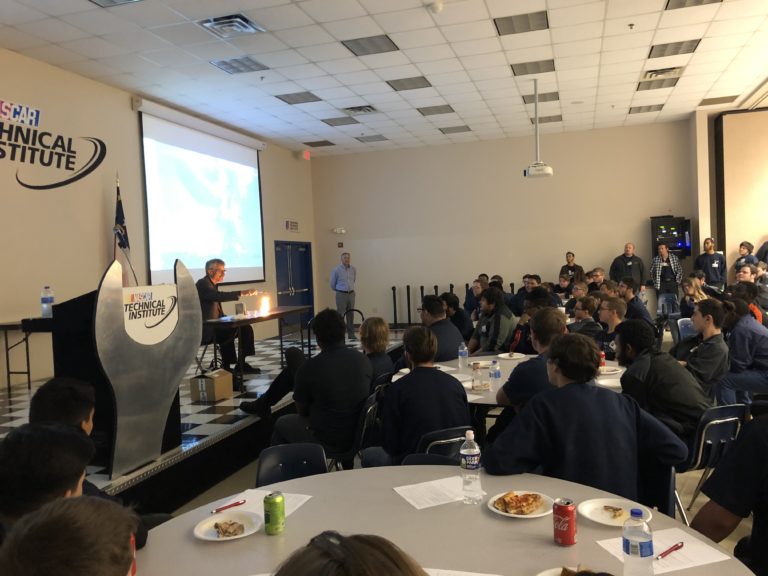 This week, the American Ethanol team partnered with ECR Engines’ Dr. Andy Randolph to host two engine performance workshop sessions for over 300 NASCAR Technical Institute (NTI) students. NTI is part of the larger Universal Technical Institute (UTI) network, which has 12 total campuses across the country that train future automotive technicians. At the NTI campus, students participate in a roughly year-long core curriculum before graduating from the base program, at which point many of them go off to work as consumer technicians. NTI also offers multiple continuing education programs for manufacturers like Ford and Nissan, as well as a NASCAR-specific program where students can train for roles within NASCAR and motorsports.

In the workshop, Dr. Randolph walked students through the value of octane and why octane is important for modern engines, highlighting the benefits of ethanol specifically through scientific principles and practical demonstrations. Students were highly engaged, making sure to stay after the presentations for follow up questions with Dr. Randolph. We surveyed the students on their sentiments toward ethanol before and after the discussion and look forward to sharing the results with you.

Deric Kramer Gets into the Halloween Spirit in Las Vegas 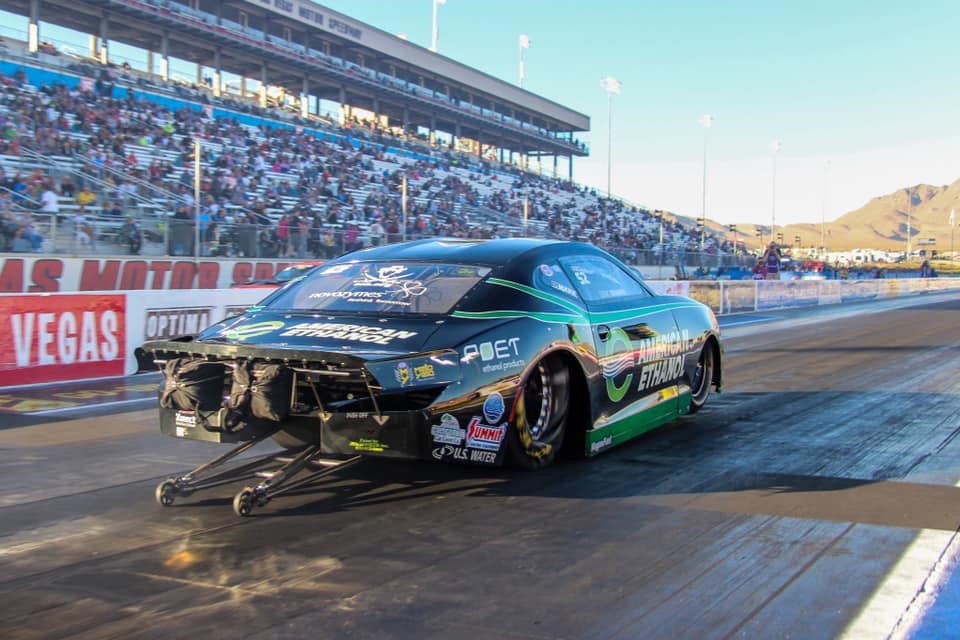 Deric Kramer and his team had some fun at last weekend’s Dodge NHRA Nationals Presented by Pennzoil, getting into the Halloween spirit dressed as characters from the iconic Ghostbusters franchise. The race, held in Las Vegas, was the penultimate NHRA Pro Stock event of the 2019 season. Kramer entered the race in fifth-place in NHRA Pro Stock points standings and was hoping for a great showing in Vegas to move up the leaderboard ahead of the final race of the year. Unfortunately, Kramer false-started before the green light in the first elimination round against Kenny Delco which knocked him out of contention. Kramer currently sits in seventh-place Countdown to the Championship points heading into the November 14 Auto Club NHRA Finals at Auto Club Raceway at Pomona in Pomona, Calif. You can check out the latest updates on Kramer’s Facebook and Instagram pages.