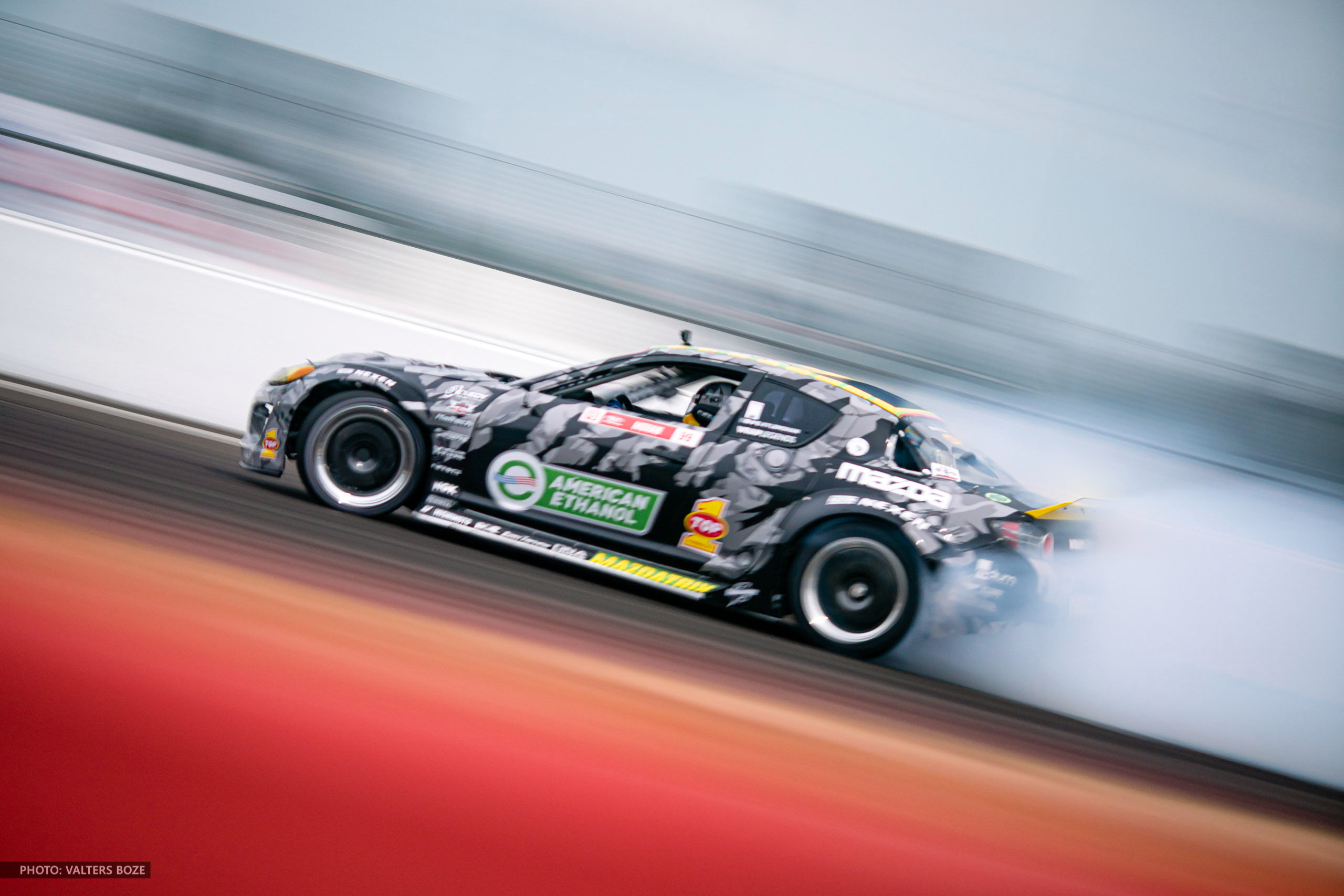 Kyle Mohan and his American Ethanol Mazda RX8 are back in action this weekend at Formula Drift Seattle for the sixth round of the Formula Drift season. Mohan and his team have been working to dial the American Ethanol car in and optimize its performance in its debut season. It has been a work in progress for Mohan and team, who have made improvements with the car each week. When asked in between practice round how the car felt compared to the previous round in Seattle, Mohan said, “So far, much better. We were able to do some work on the dyno in between rounds and replace some hard parts and electronics. We’ve done about six laps in practice and each run has been getting better and better.”

Head over to the Formula Drift website for info for where and when to watch the event this weekend and check out Kyle Mohan’s Instagram page for more content from St. Louis! 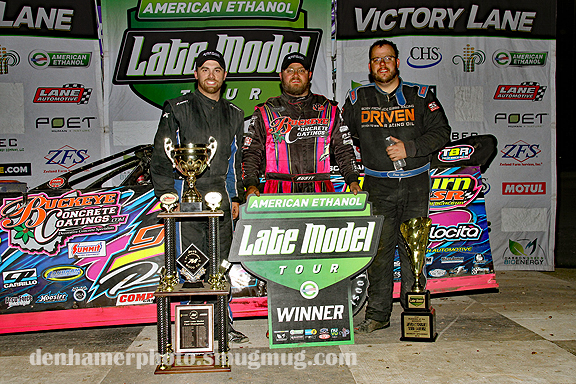 Last weekend, the American Ethanol Late Model Tour (AELMT) returned to Merritt Speedway for the second time in 2019 to host the largest dirt track late model race in the state of Michigan. The 31st running of the Ed Vanduinen WoodTic was paired up with the 2nd Annual Dan Salay Memorial race to form a blockbuster event with a $10,000 top prize purse. After qualifying and various heats, 26 cars lined up for the 74-lap main event. AELMT driver Rusty Schlenk took the early lead and never looked back, winning the event wire-to-wire. The next event for the AELMT is a double-header weekend over Labor Day in Illinois. The two tracks hosting the double-header are both new entrants into the AELMT circuit – Farmer City Raceway and Fairbury American Legion Speedway. Visit AELMT.com for a more detailed recap of last weekend’s event and a look ahead at the remainder of the schedule. 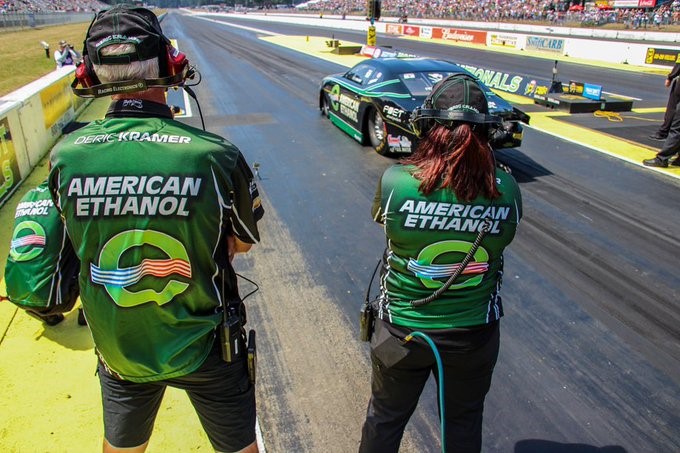 Deric Kramer earned another semifinal appearance last weekend in the Magic Dry Organic Absorbent NHRA Northwest Nationals at Pacific Raceways, continuing his ongoing run of great performances in the NHRA Pro Stock series. Kramer qualified well leading up to the elimination rounds and worked his way to the semifinals where he was ultimately overcome by Matt Hartford.

“Another semifinal appearance for our American Ethanol team today at Pacific Raceways,” Kramer said. “The Western Swing is over, and we didn’t quite make it to the winner circle, but we inked some valuable points along the way. At the end of the day, that’s really important too.”

Austin Dillon and the No. 3 Team Battle at Watkins Glen

Austin Dillon headed into last weekend’s GoBowling at the Glen race ready for another road course challenge. Road courses has been a thorn in the side of Dillon and the No. 3 team over the years, and last weekend provided more learning opportunities for driver and team.

“Road course racing has never been our forte, but we headed into Watkins Glen International with high hopes of using all of the tools at our disposal to earn a solid finish in the Bass Pro Shops Chevrolet Camaro ZL1,” Dillon said. “It was a struggle to gain track position after starting further back in the field than we had hoped, but I’m so proud of this Richard Childress Racing team because they never gave up. Throughout the race, I listened to my team as they gave feedback to help me hit my marks throughout the seven-turn road course. They also made great adjustments throughout the race to help with a tight-handling condition. In the end, we couldn’t overcome the lack of forward drive and ended up finishing just outside the top-30. We have work to do on the road courses, and this team deserves better. We’re resetting and heading to Michigan International Speedway next week with a goal of earning a win and punching our ticket into the Monster Energy NASCAR Cup Series Playoffs.” 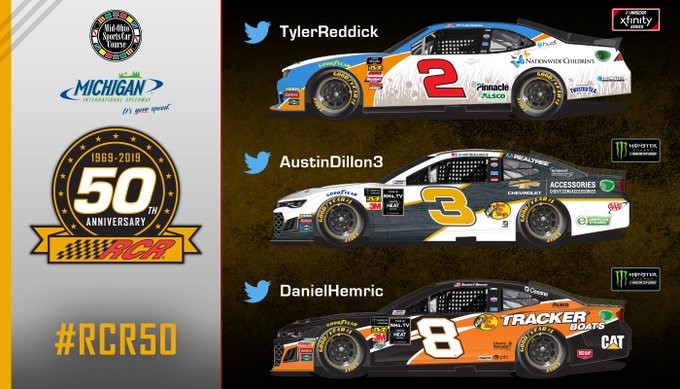 Michigan International Speedway has been kind to Austin Dillon over the years, where he has earned two top-5 and four top-10 Cup Series finishes, as well as an Xfinity Series win. The Consumers Energy 400 at Michigan International Speedway comes at the perfect juncture for Dillon, who is pushing for a win in the final regular season races of the year in order to punch his ticket back to the Monster Energy NASCAR Cup Series playoffs once again.

“We had a strong Chevy at Michigan International Speedway in June,” Dillon explained. “We had great opportunities to run inside the top-five and top-10. We won a Stage and I thought we had a solid, top-five car but I tried to make a move to the outside and when I made it three-wide I got a little too high. The No. 24 car finished me off there. I thought I had it saved, but he got in my left rear. This time around, there will be traction compound in that same area, which will help the racing. I’m excited about going back to Michigan International Speedway. We have that circled as one of those places where we can capitalize.”

The Consumers Energy 400 at Michigan International Speedway will be televised on Sunday, August 11 at 3 p.m. Eastern time on NBC Sports Network. It will also be broadcast live on the Motor Racing Network and SiriusXM NASCAR Radio.