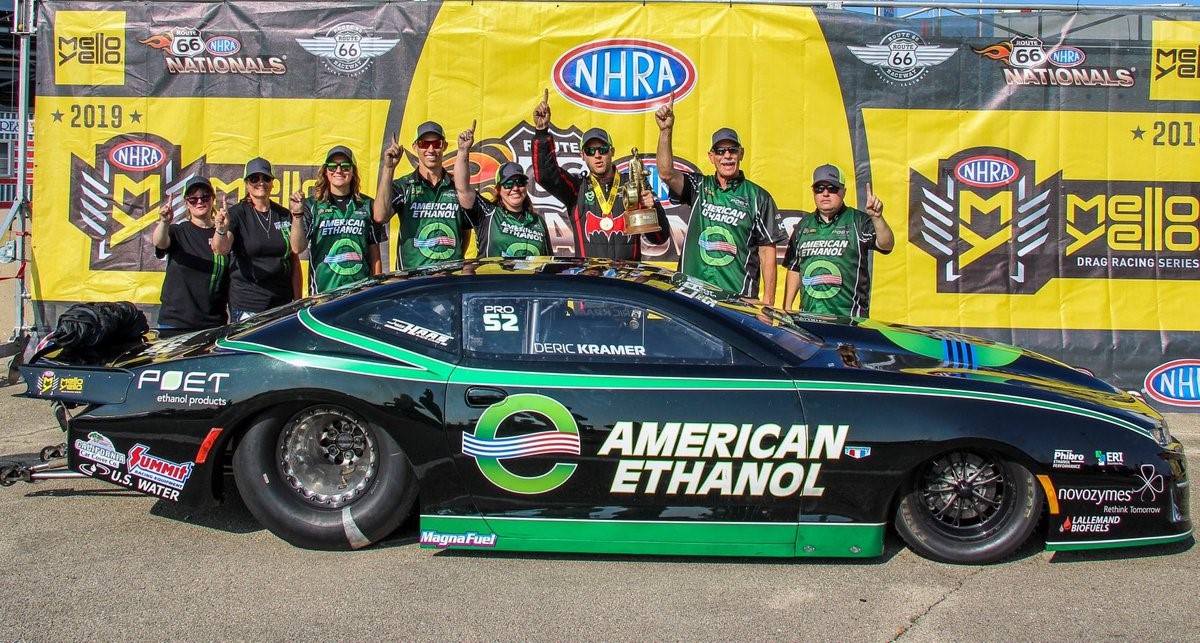 Deric Kramer powered his American Ethanol Chevrolet Camaro to a thrilling victory last weekend at the NHRA Route 66 Nationals at Route 66 Raceway in Chicago, his first win of the 2019 season. Kramer defeated Rodger Brogdon, Matt Hartford, Alex Laughlin, and Erica Enders on his path the winner’s circle. He came into the elimination rounds as the No. 6 qualifier and dominated the competition all the way to the final round where he squared off against Erica Enders.

In the final matchup, Kramer put on a jaw-dropping performance and turned in the fastest elapsed time of the event with a 6.532 second 1/4-mile run at a blistering 210.70 mph, which would have left Enders in the dust even in spite her 0.014 false-start.

Watch as Deric Kramer picks up his third career Wally at the #Route66Nats.American Ethanol

“As a KB Racing-powered car, it was really cool to take out all Elite cars on race day in our American Ethanol Chevrolet Camaro,” Kramer said. “Pro Stock is a tough category and you really can’t make any mistakes. Since our win in Brainerd last year, we’ve made little mistakes and I finally feel like we’ve got our racecar back…When I saw that win light on when I was about to hit high gear, it’s a relief and you can just enjoy the ride at that point. You get 6 seconds of fun instead of 6 seconds of pressure on your way to the winner circle.”

Last weekend’s win was the third of Kramer’s career, and he’ll be back in action looking for two in a row at the Summit Racing Equipment NHRA Nationals on June 20-23 in Norwalk, Ohio. Be sure to follow Deric on Instagram, Facebook, and Twitter and congratulate him on his amazing performance. 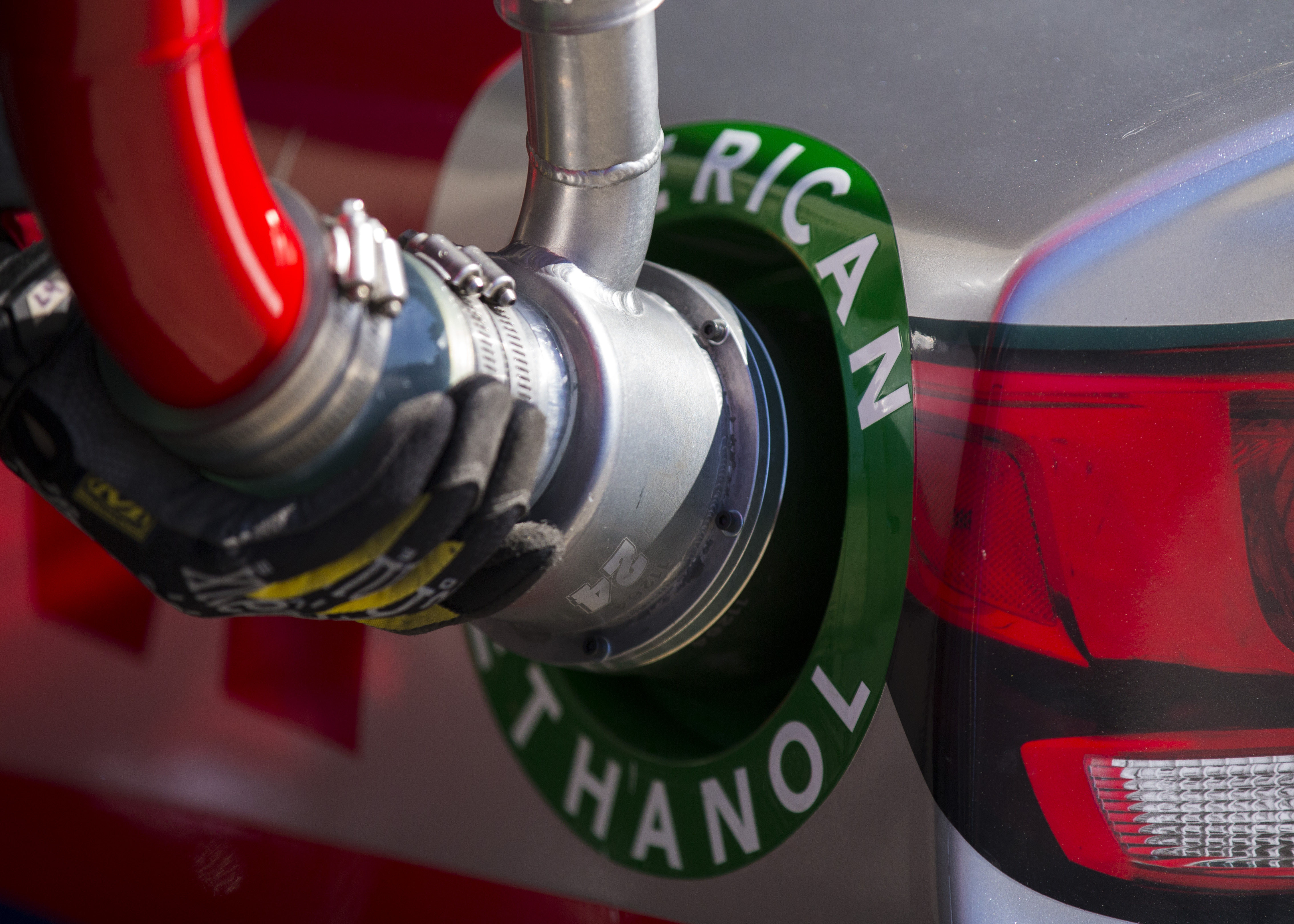 In celebration of the recent announcement to allow year-round sales of E15, NASCAR published an editorial on NASCAR.com highlighting the benefits that Sunoco Green E15 has played in the sport, as well as the consumer benefits of year-round E15 availability. The editorial features remarks from Growth Energy CEO Emily Skor and Managing Director of Event Marketing and NASCAR Green Brandon Igdaslky on the important role that biofuels play on and off the racetrack.

The American Ethanol Modified Tour (AEmods) Presented by Allstar Performance is gearing up for a multi-state doubleheader this weekend with championship contenders vying to become the first repeat race winner of the 2019 season. The AEmods action kicks off today, June 7 at Hartford Speedway in Hartford, Mich. for the Allstar Performance 30. The former 1/2-mile oval track now enters its third year as a large 3/8-mile course that still sees high speeds and close racing.

On Saturday, June 8, crews will travel south to continue the weekend from Montpelier Motor Speedway in Montpelier, Ind. for the POET BioFuels 30. Last year, crews set a new AEmods attendance record when 51 cars showed up for the first ever appearance of the AEmods to Montpelier.

Head to aemods.com for the latest results, news, and statistics. 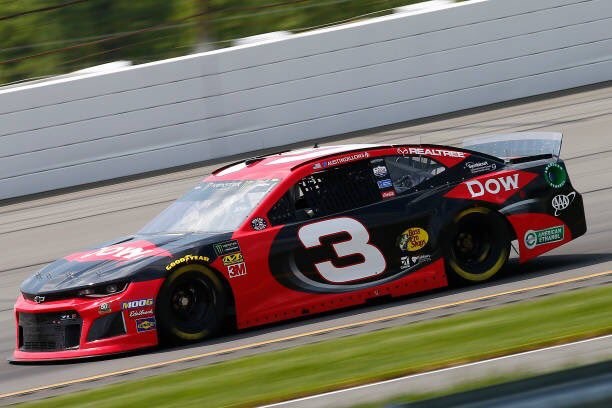 Austin Dillon had a successful season at Michigan Speedway last year with Cup Series finishes of fourth and 14th place and an Xfinity Series win in 2018. He heads to Michigan this weekend for the Firekeepers Casino 400 looking to find more success with a new rules package this year.

“Michigan International Speedway has been a really good place for us,” said Dillon. “I feel like I’ve always had speed there. We won the NASCAR Xfinity Series race last year with a similar package that we currently race in the Cup Series so as a company I feel like we have a good setup at Michigan International Speedway, and that usually bodes well.”

The Firekeepers Casino 400 at Michigan International Speedway will be televised live Sunday, June 9 at 2 p.m. ET on FOX Sports 1. It will also be broadcast live on the Motor Racing Network and SiriusXM NASCAR Radio.