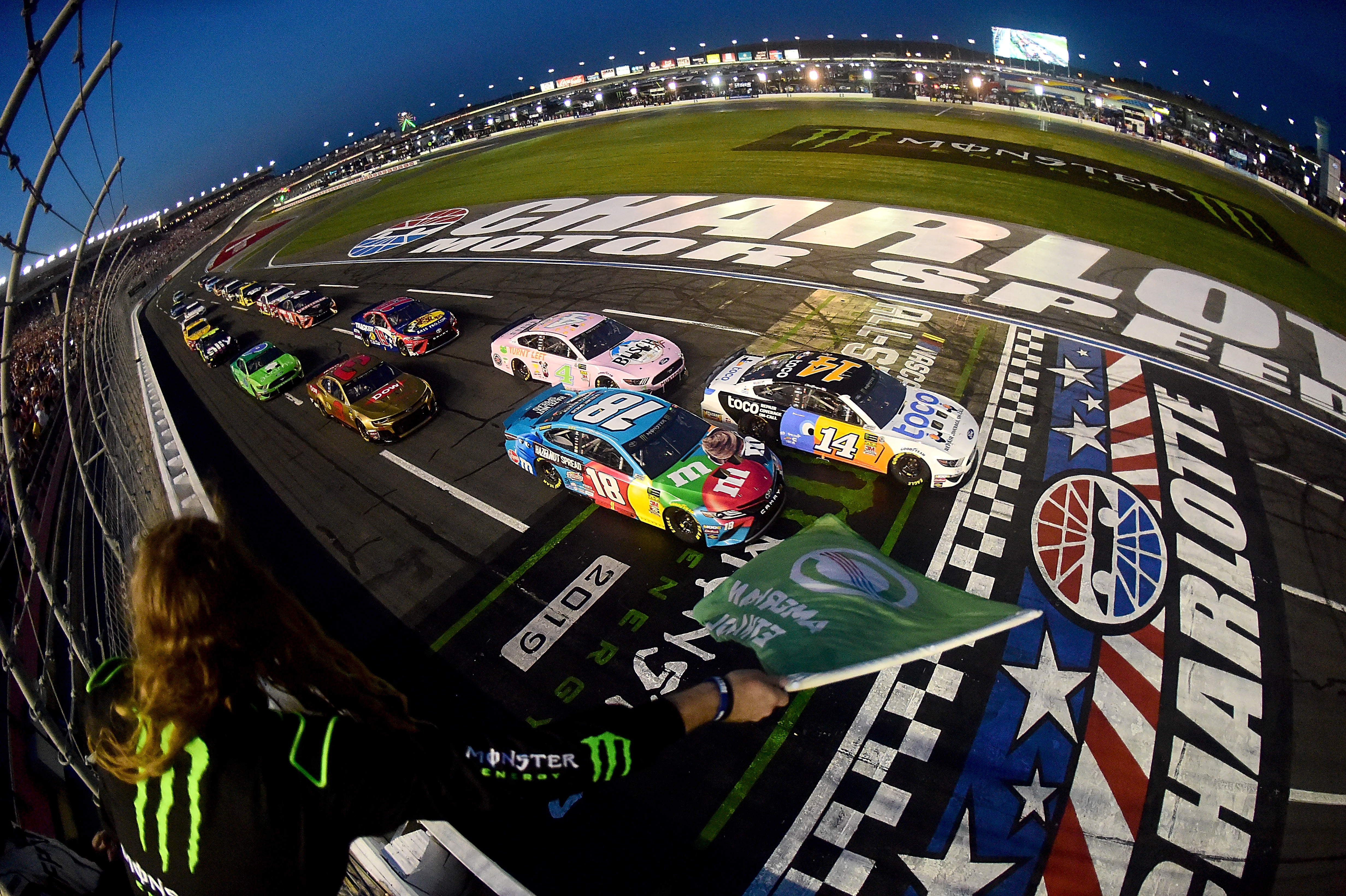 The wide-open format of last weekend’s NASCAR All-Star race made for a wild night of racing at Charlotte Motor Speedway in which Austin Dillon earned a hard-fought 7th-place finish against his fellow elite NASCAR drivers. Though official Monster Energy NASCAR Cup Series points weren’t on the line last weekend, the All-Star race competition was still fierce as the best and brightest stars in the sport battled for the $1 million prize and status as All-Star champion.

“I’m proud of my Richard Childress Racing Team,” said Dillon. “They gave me a solid Dow Chevrolet Camaro ZL1 tonight even though we weren’t able to get the win and the million-dollar paycheck. Our restarts were good, and we could make a lot of ground up on the top if I got in the right line. We had a pretty good run going, but we ended up making contact with the No. 18 car and the damage from that wreck really hurt the handling of our car. After that, we ended up with more damage when the No. 11 car wrecked, and that further affected our handling. I thought I had a good restart at the end, but the left-front wouldn’t turn anymore from all the damage. It was still a productive weekend and we learned a lot that we can apply to the Coca-Cola 600 next weekend.”

The race served as a welcome tune-up for the Coca-Cola 600, which will also take place at Dillon’s hometown Charlotte Motor Speedway this weekend. 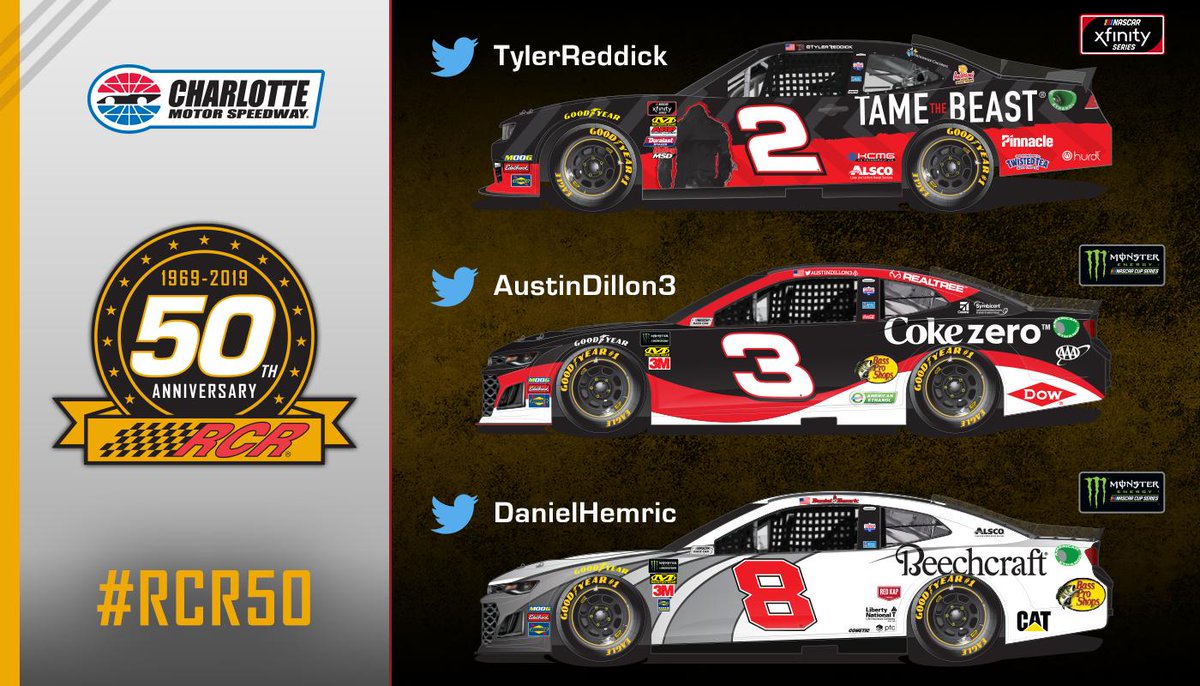 The Coca-Cola 600 at Charlotte Motor Speedway holds a special significance for the No. 3 team at RCR, as Austin Dillon earned his first career Monster Energy NASCAR Cup Series win at that race in 2017 in front of his hometown fans. In addition to his history at the track, the race is also special because it kicks off the NASCAR Salutes portion of the Cup Series schedule, which means Dillon will chase his second win at the track while sporting a special paint scheme that honors U.S. military servicemembers. This year, the No. 3 car will be adorned with the name of U.S. Navy Seal member Chad Michael Wilkinson as part of NASCAR’s 600 Miles of Remembrance Program during this Memorial Day Weekend.

“For me, meeting different military members from all different branches really instills a sense of pride for our U.S. Military,” Dillon explained. “It means so much to be able to stand and hold your hand over your heart for the flag during the National Anthem at the racetrack. That’s the most impactful moment of the entire weekend for me. The only reason I’m allowed to do what I do on the weekends is because of the country that we live in and the people that have lost their lives defending our freedom. I’m proud to stand with my hand right over my heart in front of the flag every time. It’s important to me and my family, and I’ve always felt like that was right. We are running this race with Chad Michael Wilkinson’s name on our windshield header as part of NASCAR’s 600 Miles of Remembrance program. Chad was a Navy SEAL, and his family and some of his SEAL Team will be in attendance at the race. It is always nice to have the opportunity to give back as we are running those 600 miles of remembrance to a family that has given so much to this country.”

“I’ve been so fortunate to be able to have come here since I was a little kid and watch races right inside turn one from my grandfather’s condo. I’ve seen so many laps at Charlotte Motor Speedway and have seen a lot of guys from RCR run well at the track. I watched Jimmie Johnson dominate for years. It’s been a good track for me, and I always enjoy coming to Charlotte Motor Speedway.”

The Coca-Cola 600 at Charlotte Motor Speedway will be televised live on Sunday, May 26 at 6 p.m. Eastern time on FOX. It will also be broadcast live on the Performance Racing Network and SiriusXM NASCAR Radio.

The American Ethanol Late Model Tour (AELMT) has put its bad-weather woes in the rearview mirror and is now in a groove of great monster race weekends. Last weekend saw the tour take over the state of Indiana with a doubleheader at Brownstown Speedway and the Gas City Speedway, and this weekend the tour has a tripleheader in Michigan. The first race will be held on Friday, May 24 at I-96 Speedway, followed by a feature on Saturday, May 25 at Thunderbird Raceway, and concluding with a finale on Sunday, May 26 at Merritt Speedway. In addition to action-packed racing throughout the weekend, the tripleheader provides three great opportunities for the tour to promote the benefits of biofuels to diehard racing fans and car enthusiasts.

Check out the AELMT website for more details on their huge race weekend!

Welcoming the Newest Member of the Kyle Mohan Racing Team

We have some very exciting news from American Ethanol driver Kyle Mohan and are thrilled to announce that baby Maxwell (Max) Mohan joined the team on May 13, 2019! An overjoyed new father, Mohan said, “I’m very proud of my wife Adrienne and our little drift racer. Baby Max is already looking strong and reaching for the shift lever. As the family grows, sustainable, clean fuels are even more important to everyone.” Be sure to head over to Kyle’s Instagram page and congratulate him on the wonderful new addition to the family! 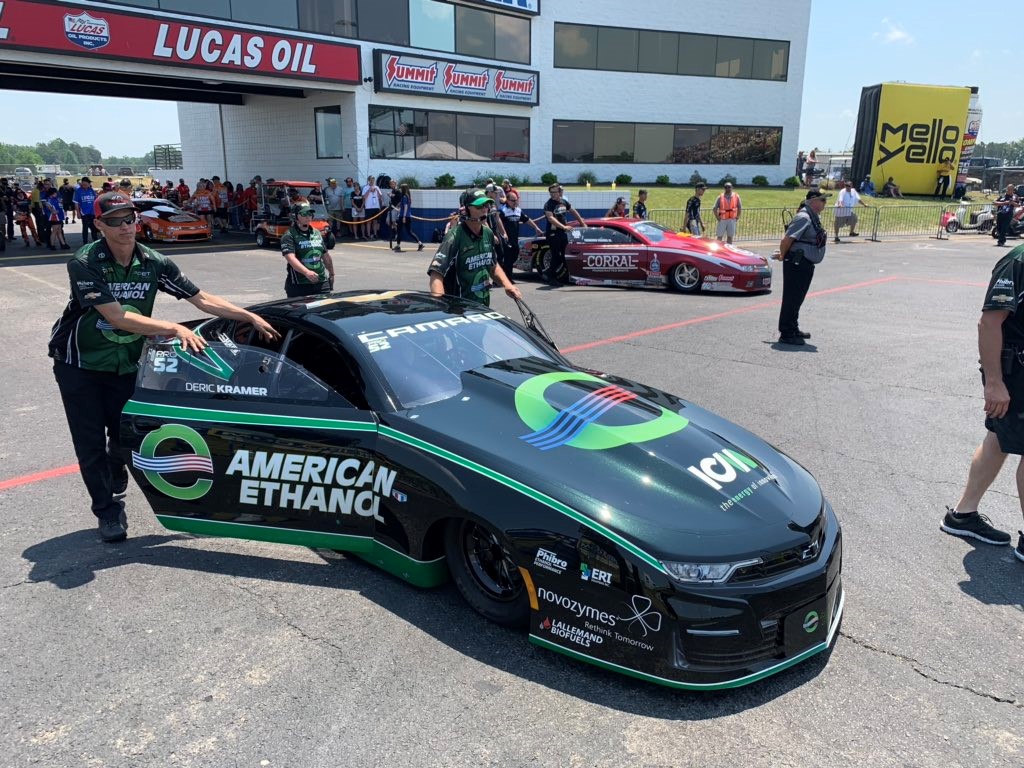 We were excited to see Deric Kramer and his American Ethanol Chevy Camaro back in the NHRA Pro Stock action last weekend at the NHRA Virginia Nationals in Richmond, Va. Kramer’s last event was five weeks prior, so he was eager to get back to the drag strip. After skillfully moving through qualifying, Kramer “shook his tires” off the starting line in the first elimination round, allowing Fernando Cuadra Jr. to advance.

NHRA Pro Stock cars generate an incredible amount of power the second drivers hit the throttle. When everything goes right, special drag racing tires can absorb much of that force and maintain traction while transferring it to the racetrack, causing the car to launch off the starting line and rapidly accelerate. However, things don’t always go as planned in racing, and sometimes the tires can essentially ripple, lose traction, and “shake,” which prevents drivers from getting the launch and acceleration they need.

Last weekend, Kramer attributed the tire shake on the American Ethanol Camaro to an issue he had with the clutch. As Kramer said on his Facebook page after the race, “Bummer about shaking the tires but happy for first time round winner Fernando Jr. because it wasn’t long ago we had our first Pro Stock round win!” Kramer will return to action on May 30 at the Route 66 NHRA Nationals in Chicago – stay tuned for more!