American Ethanol and Novozymes Team up for Xfinity Series Race 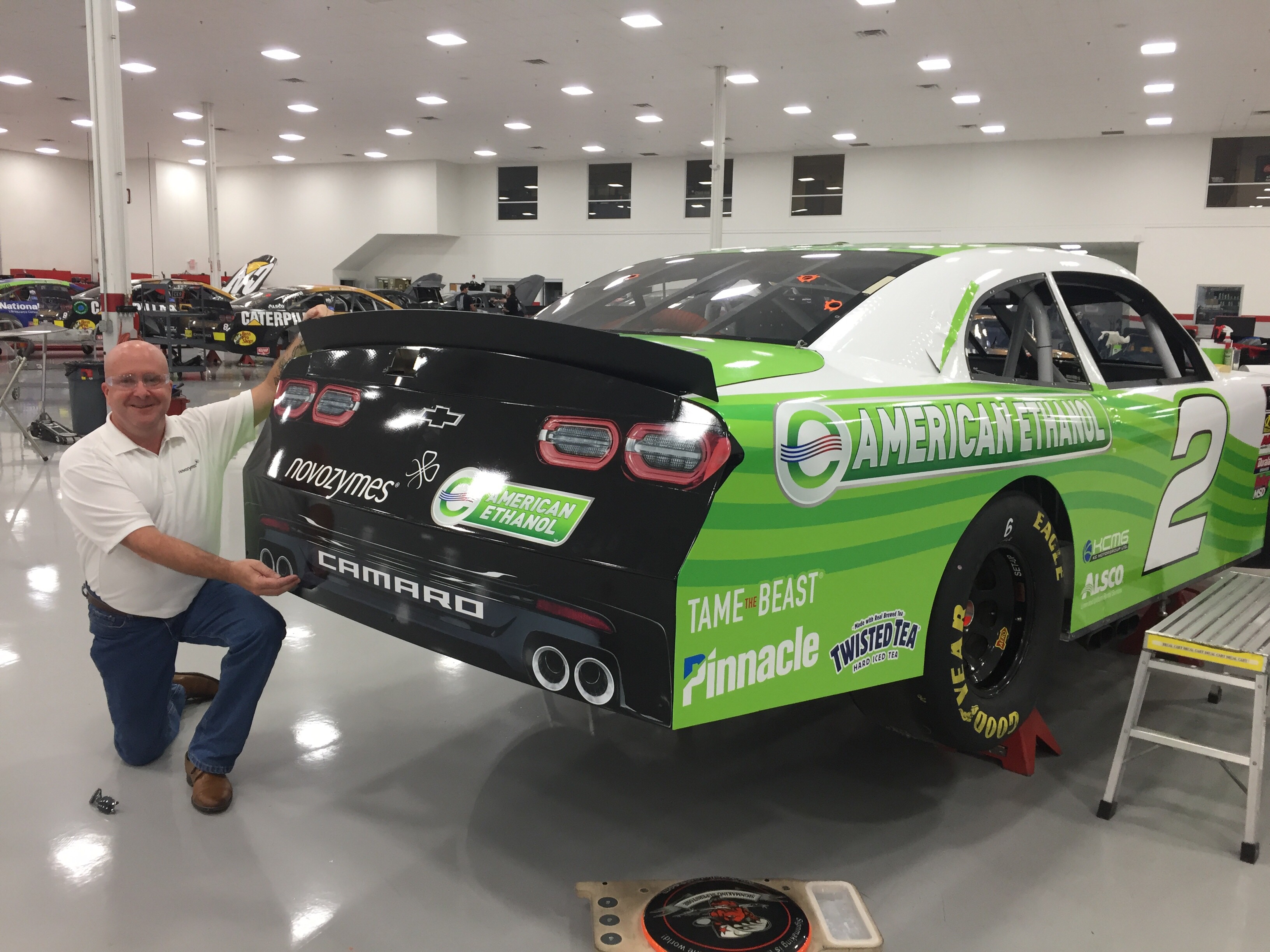 Rising NASCAR star and current NASCAR Xfinity Series points leader Tyler Reddick will hit the track this weekend for the U.S. Cellular 250 in the American Ethanol/Novozymes No. 2 Chevy Camaro ZL1 at Iowa Speedway. American Ethanol and Novozymes are teaming up with Reddick to raise awareness of the benefits of biofuels and draw attention to Novozymes’ status as the world leader in biological solutions.

Reddick will head into the friendly confines of Iowa Speedway ready to talk about all the ways that biofuels positively impact drivers across America, and the key role that Novozymes plays in helping ethanol plants continue to push the envelope in producing high-octane, cleaner-burning, renewable fuel. Additionally, Novozymes will host a group of biofuels industry guests for a day of fun and excitement at the speedway. 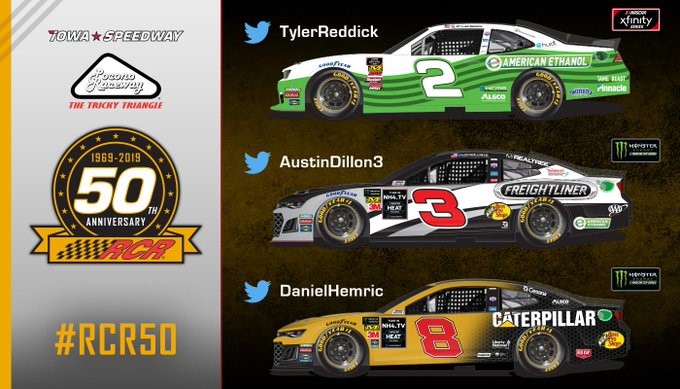 The U.S. Cellular 250 at Iowa Speedway will be televised live on Sunday, July 27 at 5 p.m. Eastern time on NBC Sports Network. It will also be broadcast live on Motor Racing Network Radio. Be sure to stay tuned to the American Ethanol (@AmericanEthanol) social media channels during the weekend for racing content on Twitter, Instagram, and Facebook, and check out the Novozymes Twitter account as well! 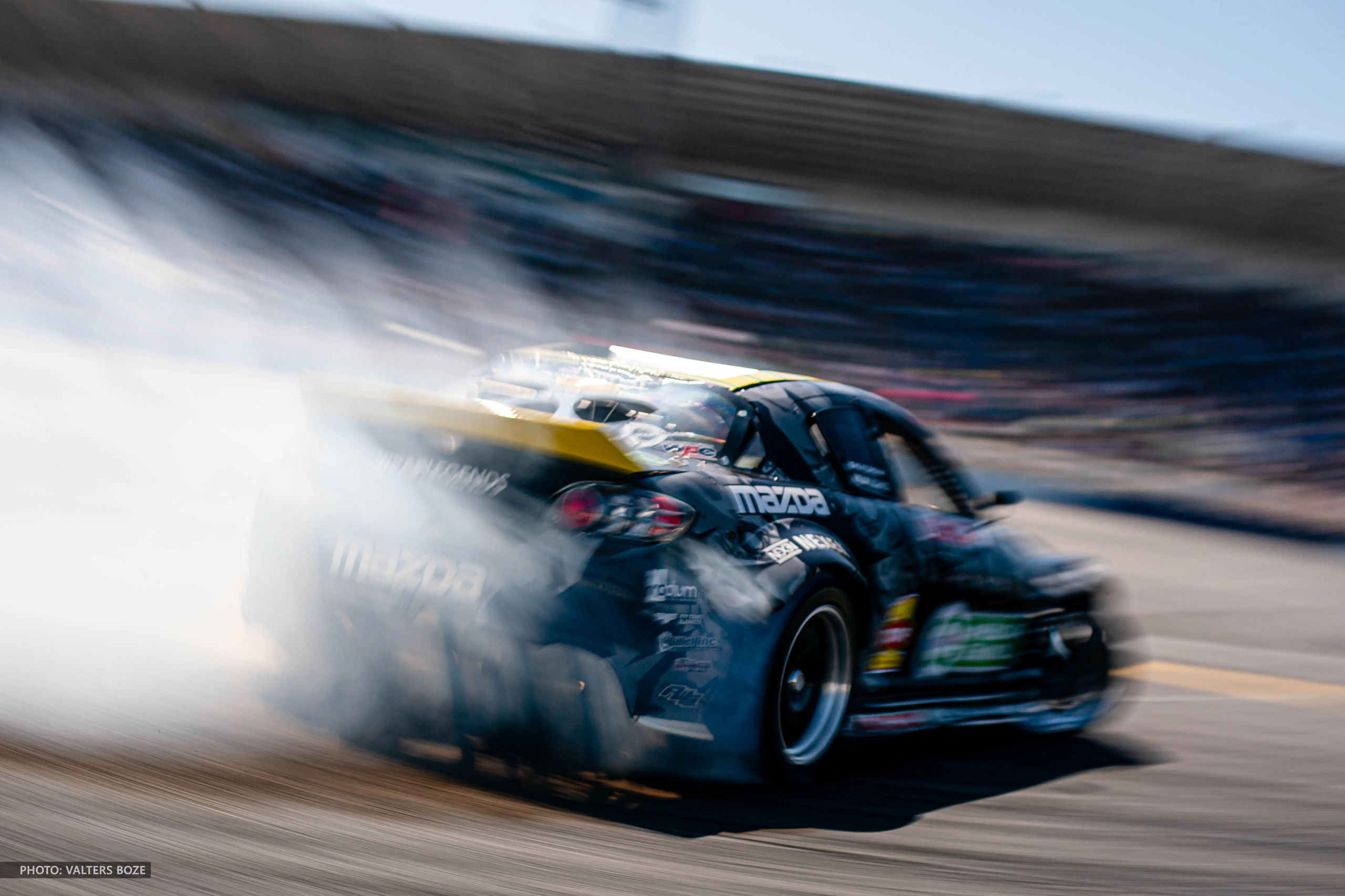 Last weekend, Kyle Mohan teamed up with American Ethanol to host a successful series of engine performance workshops throughout the day during Formula Drift Seattle. We encouraged groups of fans to come by Mohan’s pit area during breaks in the action to learn all about the 1000 horsepower American Ethanol Mazda RX8, including how Mohan’s choice to utilize high-ethanol racing blends impacts his racing season.

Mohan’s American Ethanol Mazda is always a draw at events, as it is the only rotary engine in the entire Formula Drift field. He talked in detail to well over 100 enthusiasts throughout the day, many who work on cars professionally or as a hobby, about how higher-octane, cleaner and cooler-burning ethanol helps his rotary motor generate incredible power while still being able to operate at its peak. Most Formula Drift drivers replace their engines at least once during the season if not multiple times due to the immense stress of competition, but Mohan is able to run the same engine for the entire year, which he attributed in large part to the high ethanol Thunderbolt Racing Fuel blend he uses. He also explained why the environmental benefits of biofuels are so important to he and his family and encouraged attendees to become biofuels advocates. 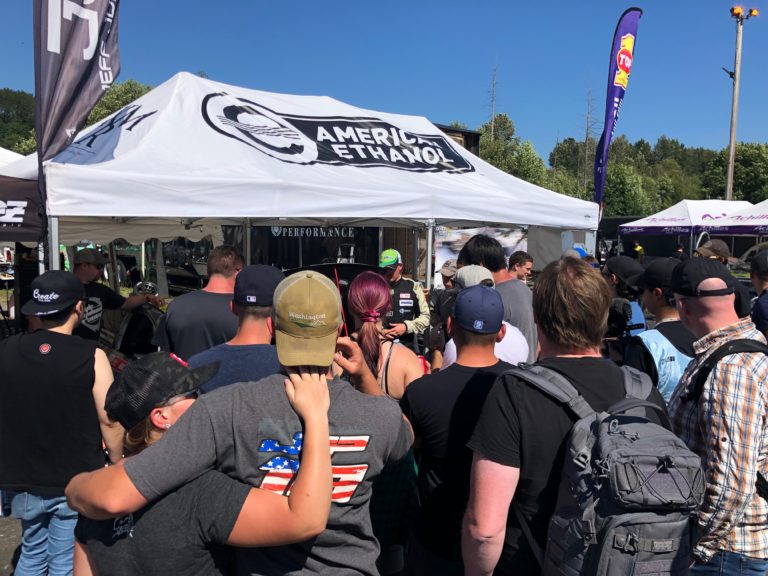 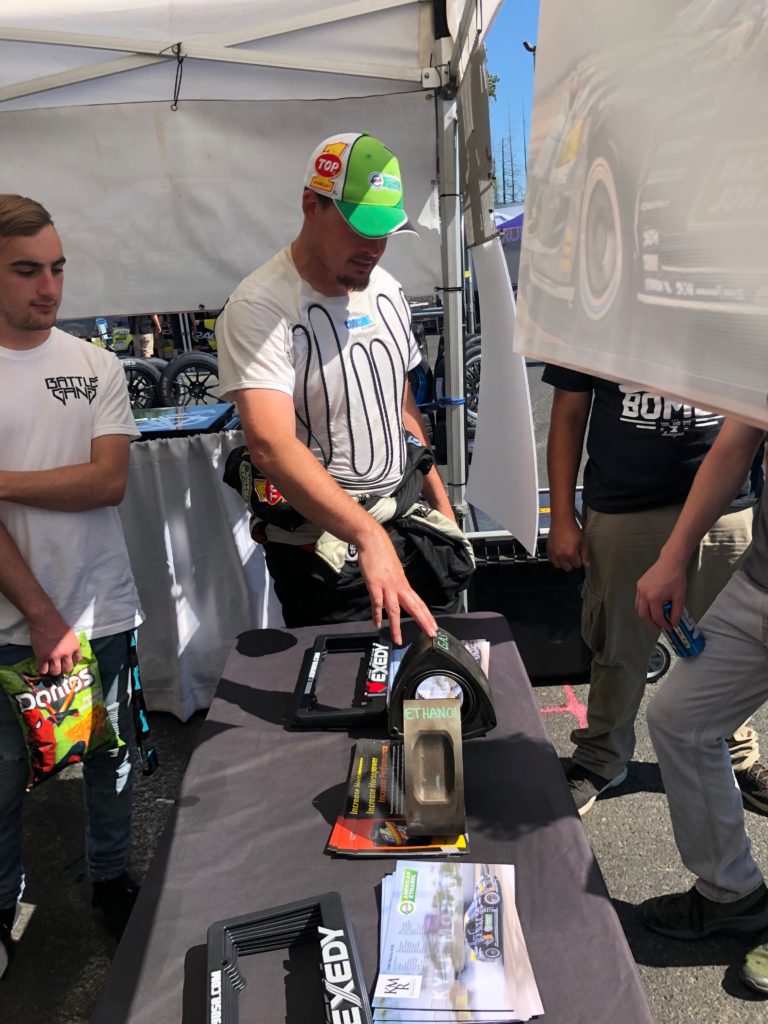 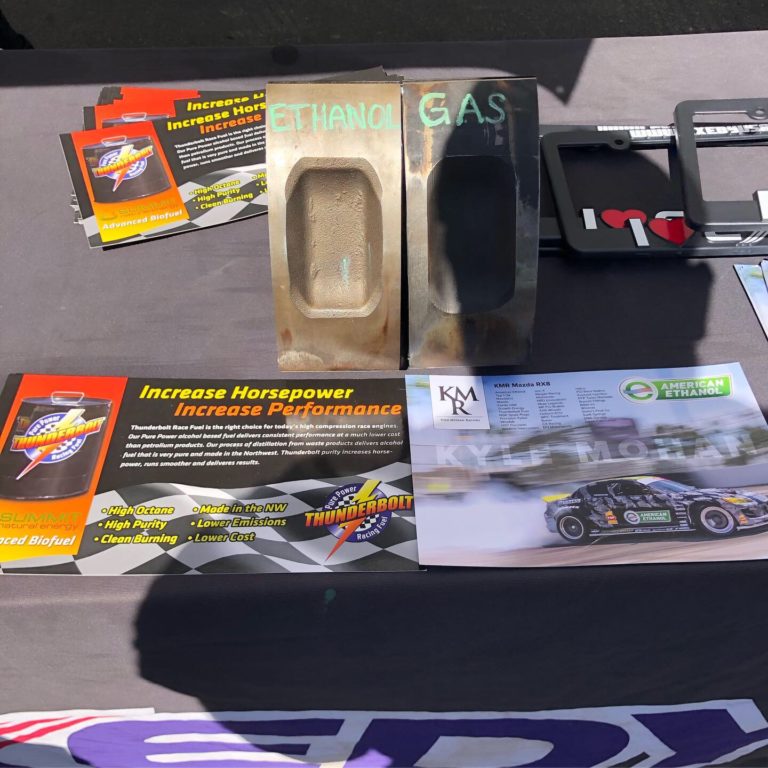 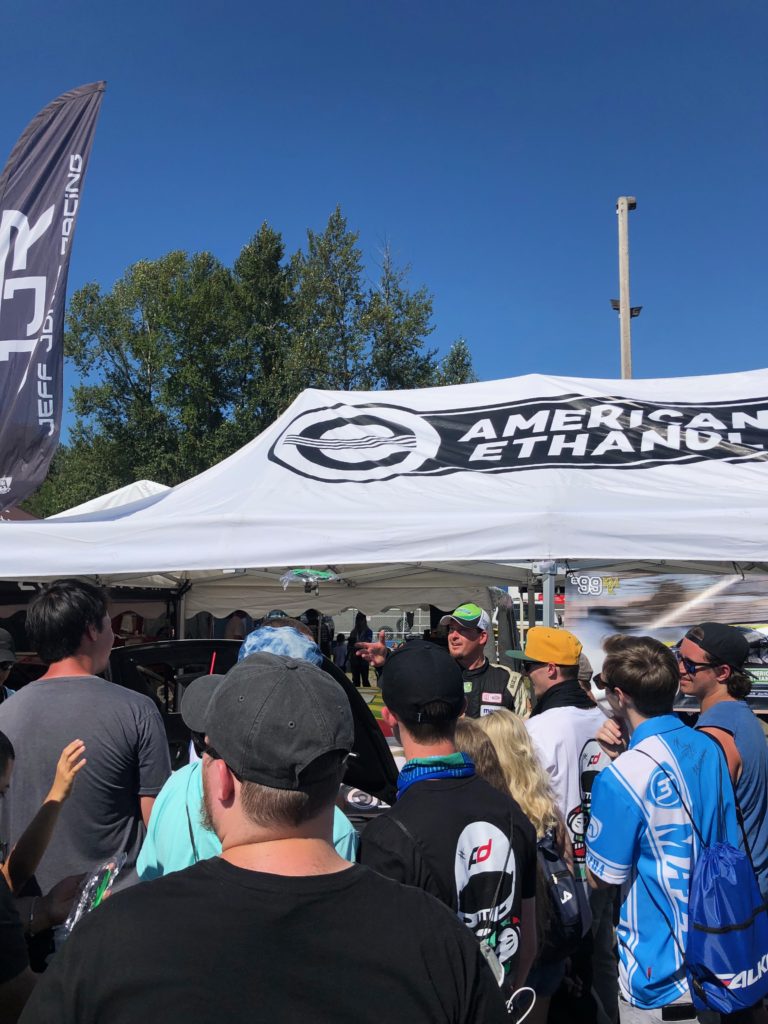 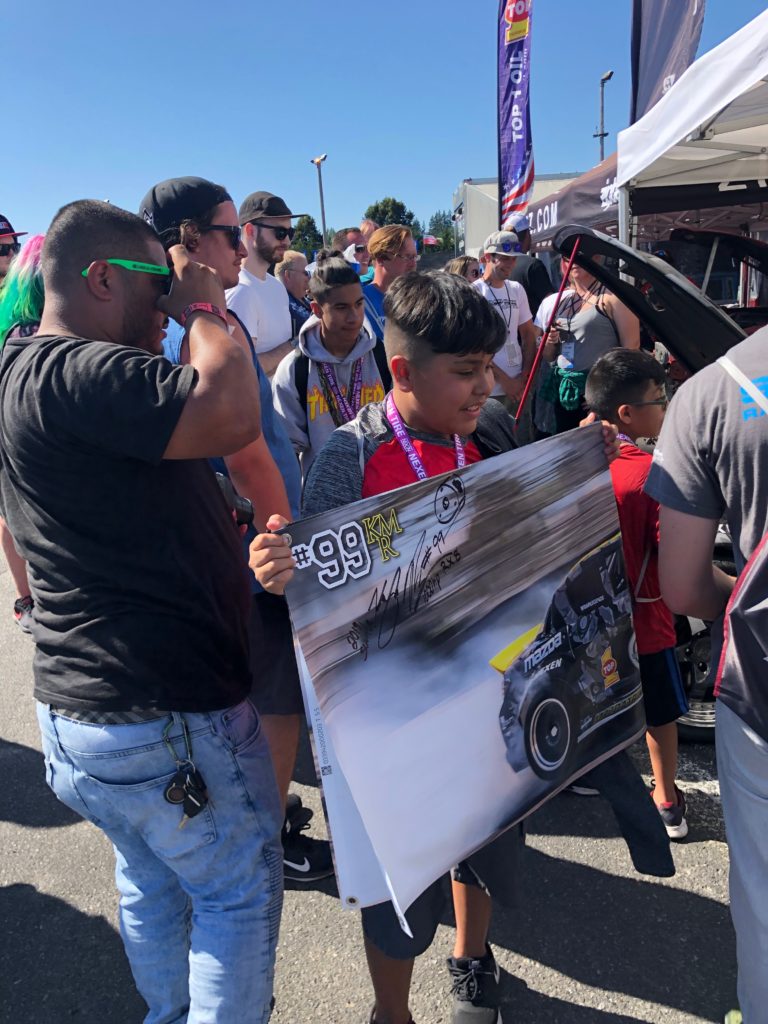 Mohan’s pit area workshops are an incredibly valuable format that allows us to bring our American Ethanol sponsorship of Mohan and his team to life. Formula Drift events have many breaks in the action where drivers return to their pits for an extended period, and all fans have the ability to come interact with the different teams in a very personal setting, which is a great way to ensure that messages stick. We heard multiple groups remark positively on how much they learned about biofuel. Mohan’s next event is on August 8-10 in St. Louis.

Deric Kramer did not disappoint his hometown fans last weekend at Bandimere Speedway in Morrison, Colorado for the NHRA Mile High Nationals, fighting his way to the semifinal round of the Pro Stock field. Kramer defeated fellow drivers Bo Butner and Jason Line before squaring off against Greg Anderson in the semifinal round. Kramer laid down a blistering semifinal run with a top speed of 197.42 mph which was barely edged out by Anderson with a 197.68 mph top speed and a slightly better start off the line. It was an impressive showing for Kramer who has been locked in lately, and we can’t wait to see him back at it in Sonoma, California this weekend for the NHRA Sonoma Nationals! For more info on the race and where to watch, head over to the NHRA website and be sure to keep up with Kramer and the American Ethanol team on his  Facebook and Instagram pages.

In case you missed it, check out this feature on Kramer from the Denver Post!

Austin Dillon did not have the showing he was looking for last weekend in New Hampshire when he and the No. 3 Behr Ultra Chevy Camaro ZL1 ended up in the wall, but another fast car and gritty performance left him feeling focused for a final playoff push.

“The Behr Ultra Chevrolet Camaro ZL1 was really fast all weekend at New Hampshire Motor Speedway, so it’s a shame that we weren’t able to showcase that speed on Sunday,” Dillon said. “I could feel a vibration early in Stage 1 but wasn’t able to get to pit road before we cut a right-front tire and ended up in the wall.  We still don’t know exactly what happened, but I’m sure the guys will be able to make a complete diagnosis on Monday. From there, it was a long day making a trip to the garage for repairs and then playing catch-up during the race. This No. 3 team has no quit. By staying out we were able to gain several spots that we wouldn’t have earned otherwise, so I’m proud of the guys for that. We’re focused on getting a win and making it to the Playoffs and we still have a few chances to do that.”

Austin Dillon and the No. 3 Team Bring Lessons to Pocono Raceway

This week, Austin Dillon and the No. 3 team head to Pocono Raceway where they will try to put past racing experiences on the tricky course to good use. Dillon discussed how he feels the Pocono racing package will play at the raceway, saying, “Yeah, we were able to build a little bit of a notebook. I think the package races decent. The speed is definitely carried through turn two and through three to the start-finish line. I think those are the most important corners. Of course, every corner is important, but turns two and three are a little bit more important because it’s the flat end of the track.”

The Gander RV 400 at Pocono Raceway will be televised live on Sunday, July 28 at 3 p.m. Eastern time on NBC Sports Network. It will also be broadcast live on the Motor Racing Network and SiriusXM NASCAR Radio.